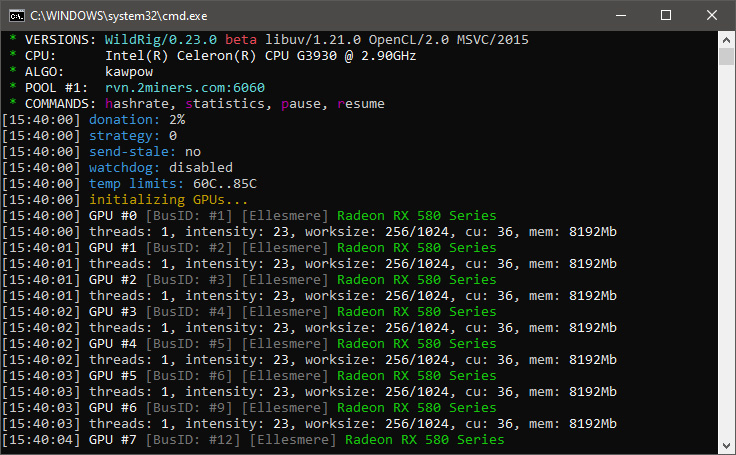 In the latest beta version of the miner WildRig Multi 0.23.1 for video cards from AMD, support for the KAWPOW algorithm, which now uses RavenCoin (RVN) , as well as ProgPoW, which produces Super Zero (SERO), was added. In the latest version, the --benchmark option for ProgPoW algorithms (including KAWPOW) was also added and the --benchmark-epoch option was added to evaluate the hash rate for a certain number of the coming era. WildRig Multi is now the third version of mining software for the KAWPOW algorithm for AMD GPUs, but unfortunately at the moment it is the slowest of them (at least that was the case in our tests using AMD Radeon RX 580 8gb graphics cards).

It seems that the fastest AMD GPU at the moment is Nanominer, followed by NBMiner and only then the new WildRig. The latest version of WildRig Multi is available for Windows, Ubuntu Linux and HiveOS in the form of binary files with closed source code and a built-in developer commission of 2% by default, which can be reduced to 1% using the option --donate-level = 1. Only algorithm WildKeccak has a fixed commission of 2% without the possibility of its reduction by the user. In the 0.23.1 update, the default commission was reduced to 1%, so now there is no need to apply the previous option. As for the problems that may arise, we did not encounter an error related to the minor difficulties of the ball, so WildRig Multi 0.23.1 cannot for the time being compete on an equal basis with alternative miners for AMD for KAWPOW. Download the latest version of WildRig Multi 0.23.1.