Updated ccMiner 1.5.54 fork from the SP for video cards based on Maxwell

We have compiled the new binaries for Windows based on the latest version source code ccMiner 1.5.54-git SP for graphics cards based on Nvidia Maxwell.

This update is mainly centered around improvements to the algorithm of mining Lyra2RE through improved core from djm34, which is integrated into the new version of the software. We received about 150 additional kHs heshreyta, with the aid of these binaries, GTX 980 graphics cards and GTX 980 Ti. It is worth noting that this version of the 54 might have some problems with the solo Mining through the local purse, in this case, we recommend that you go back to the previous version of the 53 miners. This fork is designed for video ccMiner Nvidia Maxwell, such as: GTX 750, GTX 750 Ti, GTX 960, GTX 970, GTX 980, GTX 980 Ti, GTX Titan X. These binaries have been compiled by us with the help of VSD2013 and supporting CUDA6.5 Compute 5.0 and 5.2 only for video cards Maxwell. 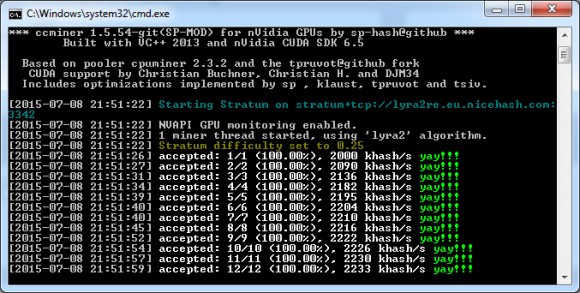