Updated binaries compiled on the basis of the latest version of the source code ccMiner 1.7.3-git fork by Tpruvot (source code) with some improvements in the support of mining Decred (DCR), which uses a slightly different Blake256 14-round algorithm.

This version supports the miner mining Decred traditionally using Getwork, and using Getwork through Stratum, which is already implemented in some popular pools. The release, which can be downloaded from the link below, includes two versions ccMiner.One binary for Windows, which is compiled with support for CUDA 6.5 and Compute 2.0, and one for the newer Nvidia cards, compiled for 64-bit Windows with support for CUDA 7.5 and Compute 3.5. Keep in mind that if you have a modern graphics card from Nvidia's, then you are advised to use the 64-bit binaries, as it provides better performance than 32-bit. Below is a brief comparison of the performance of the two versions of the miners with a video card Gigabyte GeForce GTX 970 GPU FW3OC, operating on the nominal frequencies. 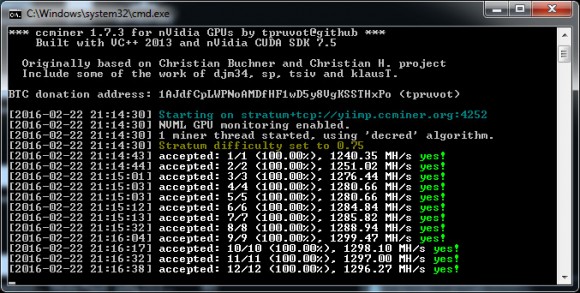