Overview of the "hype" coin for miners: ALEO

ALEO is a new first level platform (i.e. having its own blockchain) for building scalable and private WEB 3.0 applications using zero-knowledge cryptography. The coin uses a PoS + PoW hybrid consensus architecture (zkSnark algorithm) called AleoBFT. ALEO mining on the testnet is already supported by several large Chinese mining pools such as F2Pool and HPool. But why such a high interest in this coin from Chinese miners and the largest Chinese pools? The fact is that the project, in the process of three rounds of financing, was able to collect almost $300,000,000 of investments from 18 large investors, this fact proves that this is not an ordinary "shitcoin" but a quite serious and ambitious project. For comparison, the Conflux coin, popular with miners, collected about $5,000,000 at the start. Based on what, we can assume that ALEO has a chance to immediately enter the top 50-100 Coinmarketcap.

The coin has its own "Leo" language for writing smart contracts for building distributed web 3.0 applications. An IDE called Aleo Studio (for Windows, Linux and Mac OS) is also available on the developer’s website for convenient development and deployment of projects in blockchain coins, as well as its Aleo Package Manager. 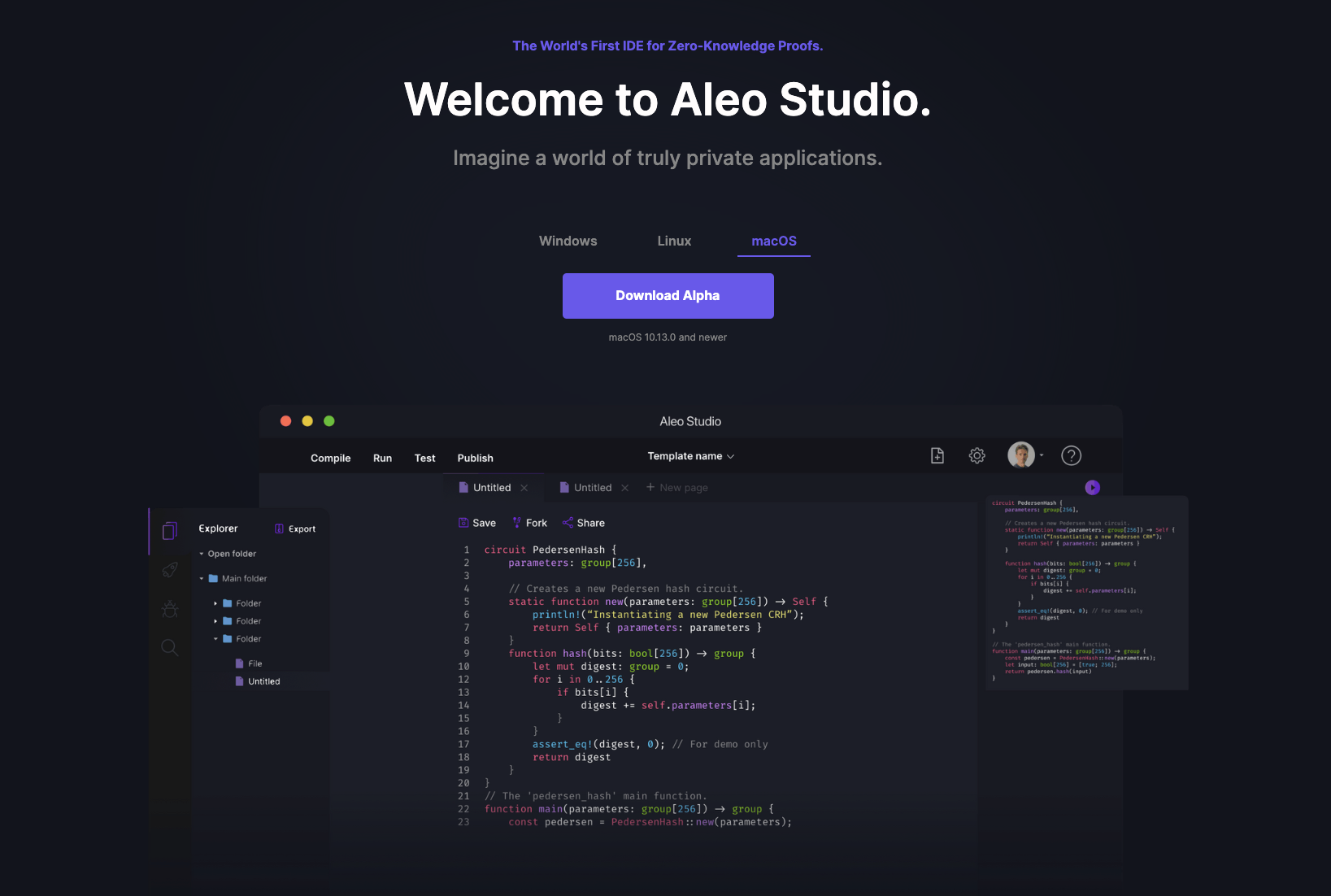 Mining on the testnet will run until January 26, 2023, after which 7.5 million coins will be unlocked and distributed among the miners on the testnet, for every 5 coins mined on the testnet you will receive 1 coin on the mainnet. At the start of the network, 1 billion coins will be generated in the genesis block, which will be received by investors and developers. All other coins will be mined through mining. The first 3 years the block reward will be 100 Aleo credits, from the 4th to the 6th years it will be 50, then from the 7th to the 9th it will be 25, and all remaining blocks will have 12.5 coins per block as a reward for mining. 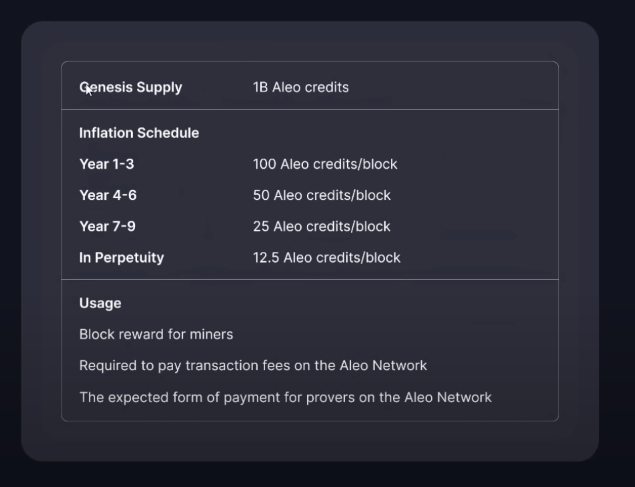 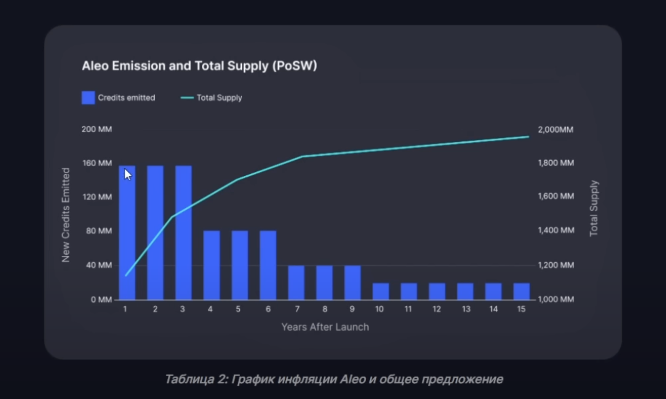 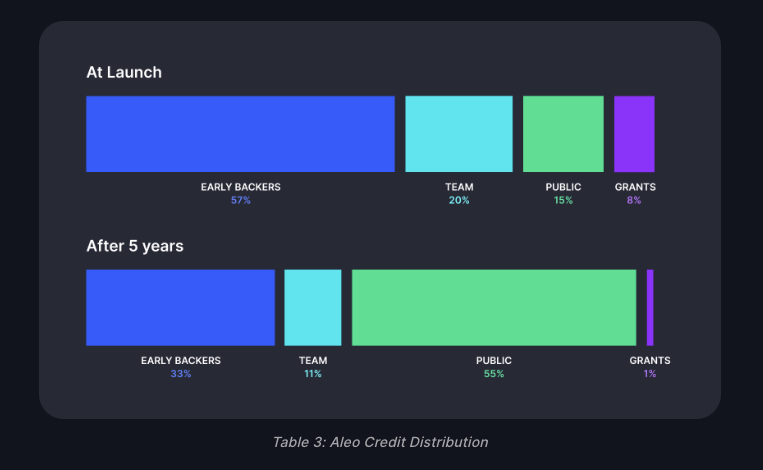 As for the mining process itself, the coin is perfectly mined using Nvidia video cards, however, there is one rather significant nuance, the fact is that the zkSnark algorithm is very processor-dependent. That is, to get the maximum hash rate that your video card (video cards) is capable of, you will need a fairly high-performance central processing unit (CPU), and the more video cards in the rig, the more powerful processor you will need to mine ALEO without losing performance from your video cards. That is, cheap Celeron and Pentium, popular for installation in mining rigs, are unlikely to fit here. Their performance is not enough even for the full "disclosure" of one top-end video card. For example, here are the system requirements for mining ALEO, published on the F2Pool pool website: Nvidia GPU with drivers version 515 or higher, 8-core CPU, 8 GB of RAM and a 128 GB SSD drive. You will also need Ubuntu 18.04 - 20.04, a console version for servers without a graphical interface, as well as download and install mining software.

Examples of hashrates of video cards for mining ALEO on the zkSnark algorithm:

You can find out the hashrate of your equipment on the website aleo.profit-mine.com.

Here is another important point, in order to get a reward for mining on the test network, you will have to go through KYC in the future. Moreover, if you mined on the pool, this process will have to go through the pool so that it has the opportunity to receive coins and distribute them among its users. If you have been mining solo, then you will have to pass KYC verification. At the moment, full requirements for KYC have not yet been presented, however, in our opinion, such countries as Russia, Belarus, China, North Korea, Iran and others may fall into the risk zone. 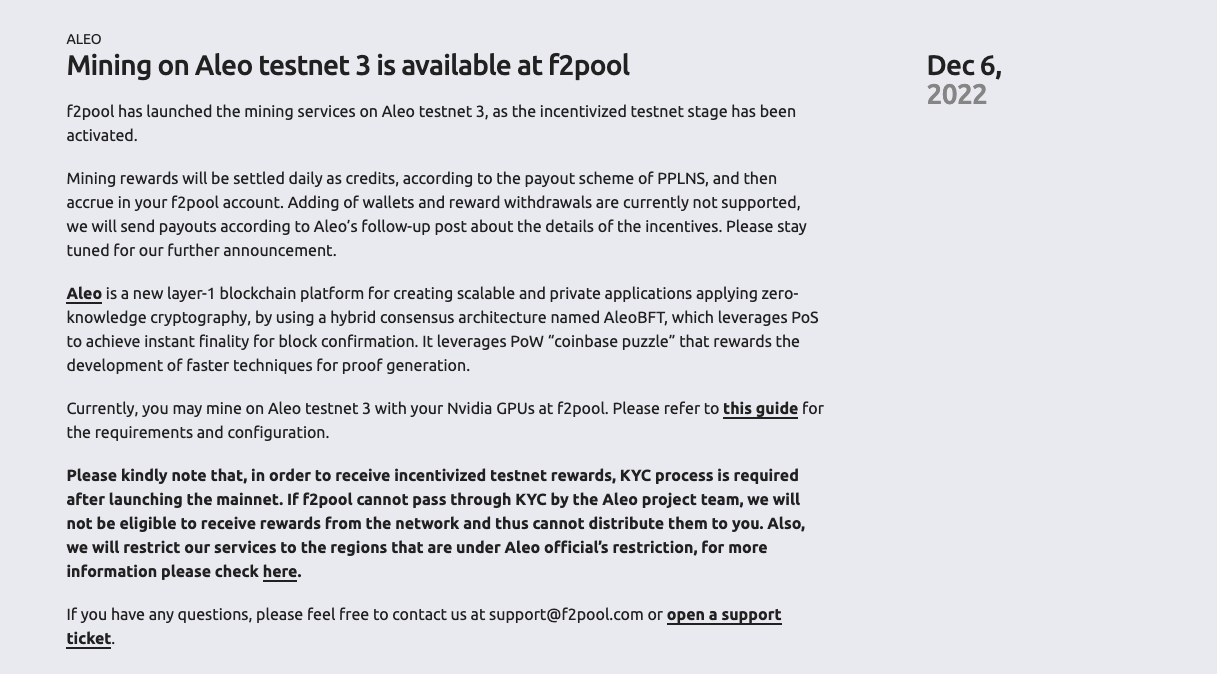 The developers of the ALEO mining miner - DamoMiner, it is recommended to mine the coin solo, if the power of your equipment allows you. There are several major advantages to solo mining, such as using your own wallet address, no risk that the pool will fail the KYC procedure (the main thing is that you can do this), receiving testnet mining rewards directly from the main network, bypassing distribution through the mining pool, the ability to request ALEO credits from your own address through your browser, all data will be transparent and protected from unauthorized access. 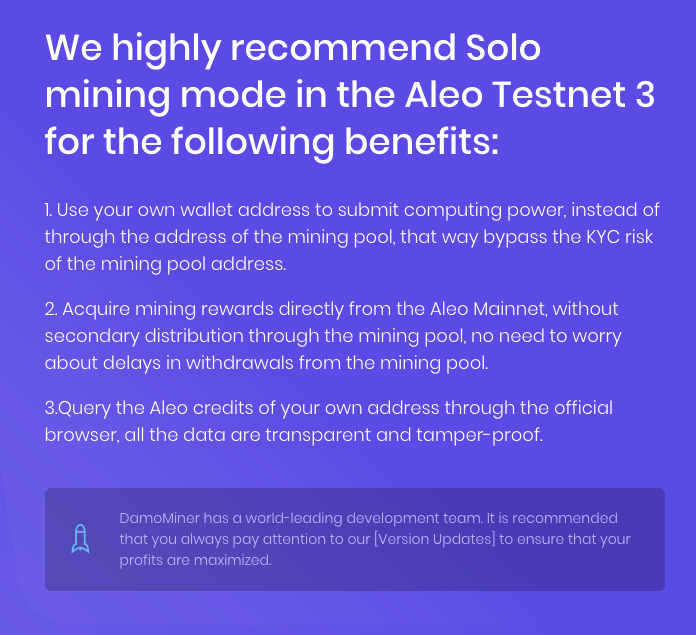 How to mine ALEO on the testnet on the F2Pool pool:

Set up your mining software as follows: 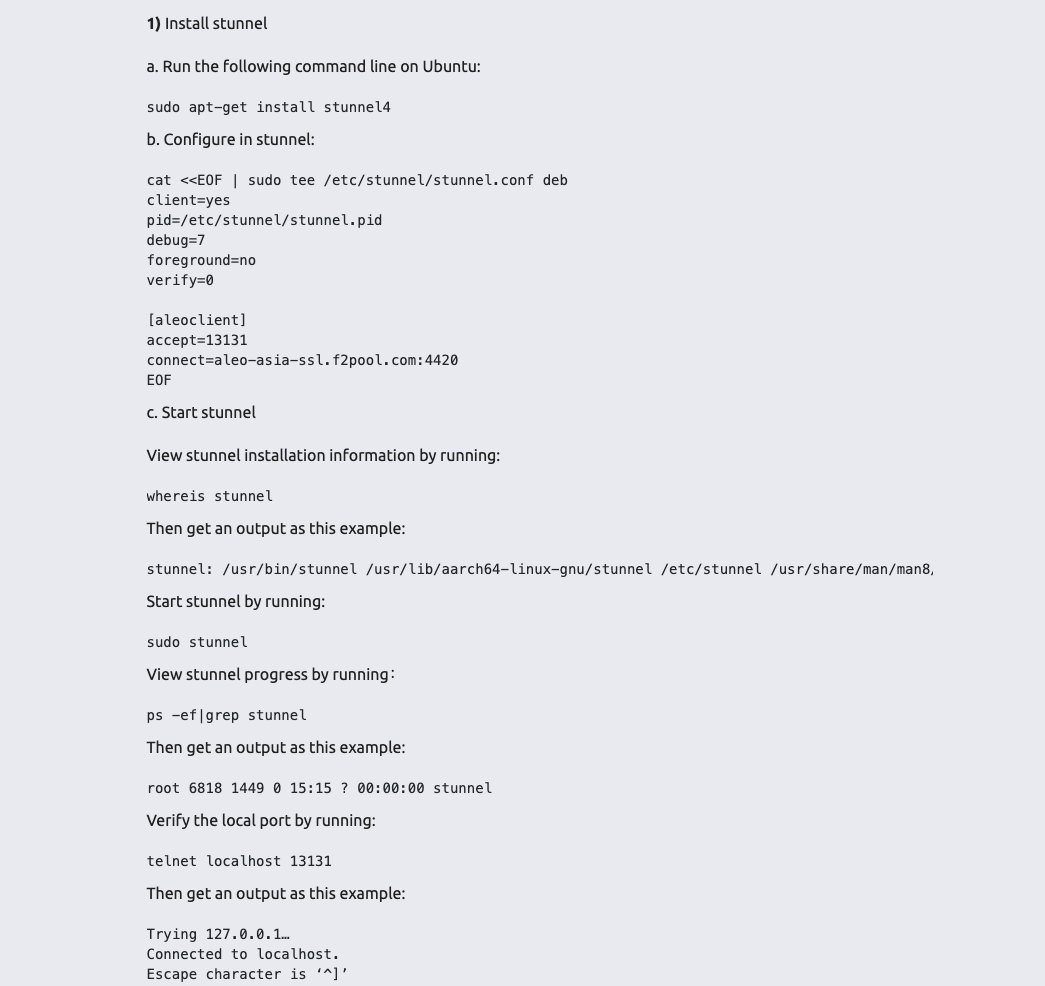 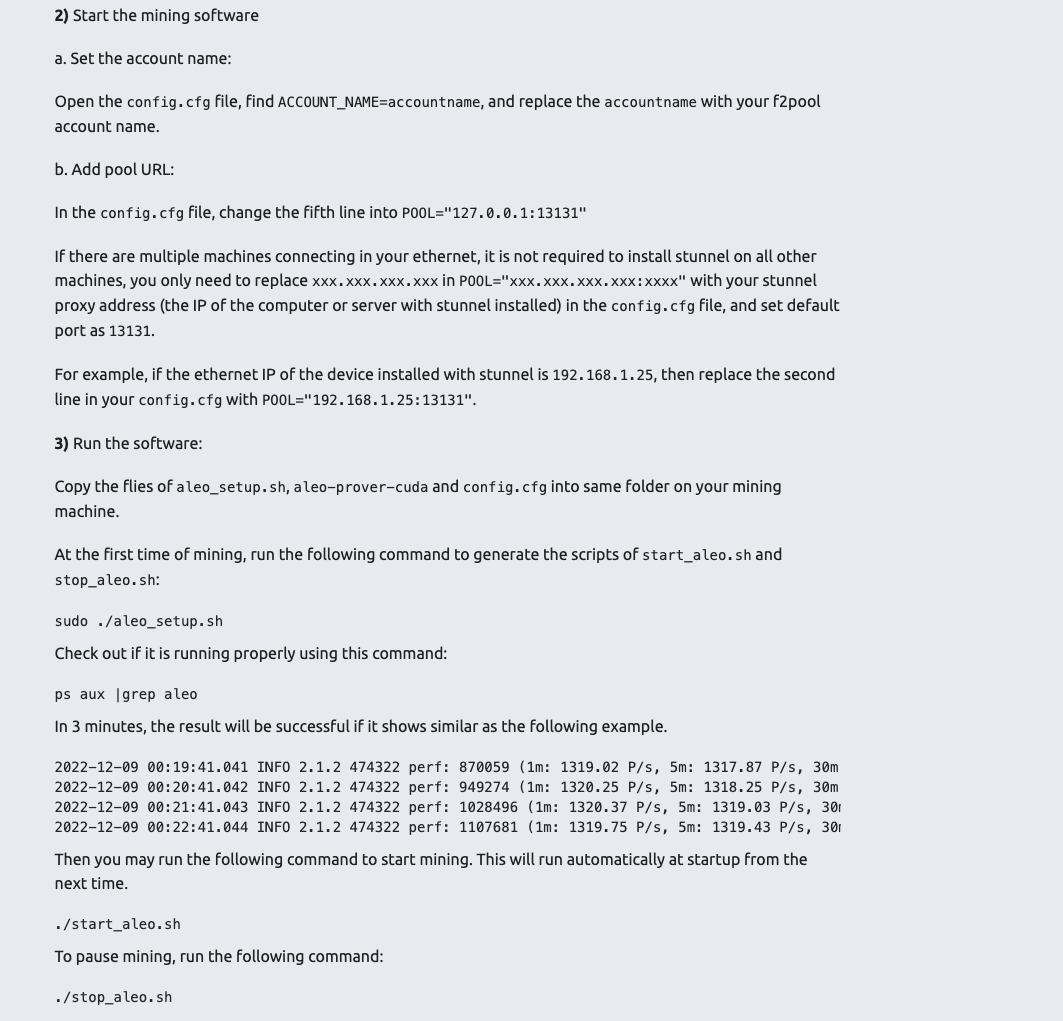 If you did everything that is written above correctly, your system should already be ready for mining. You can manage and monitor your mining process on the dashboard page or on the F2Pool mobile app.

How to mine ALEO on testnet on Windows solo without pools:

Keep in mind that you will be mining solo, and depending on the power of your hardware, it may take a long time before you can "catch a block". Again, it’s not a fact that you will succeed before the end of mining on the test network. In the case of solo mining, you will have to go through KYC in person in order to receive mining rewards on the ALEO testnet.

To determine how many credits you have on the ALEO testnet, as well as how many coins you can receive on the mainnet after the reward is distributed, you can use the official blockchain coin explorer by entering your wallet address in the upper right corner.