VeriBlock or VBK is a new cryptocurrency, which, after a year of development on March 25, 2019, launched a working version of its own MainNet. Before that, VeriBlock already went through ICO and IEO on the Bittrex exchange, and IEO was completed in just 10 seconds after the start of sales. This indicates a high interest of the crypto community for innovations that Veriblock cryptocurrency carries in its blockchain. In short, besides the traditional mining of POW, the developers of Veriblock Inc propose to use the unique Proof-of-Proof or PoP mining technology, which by using the blockchain of larger networks, for example, Bitcoin, allows you to protect your own network from 51% attacks and double spending, especially in the early stages of development.

Projects that use the Bitcoin network for their own needs are not something new and advanced, because back in 2011, the Namecoin project existed and a bit later in 2013 Mastercoin. The peculiarity of Veriblock is that to maintain the network in working condition, two-stage data verification is used to write to the blockchain. The first, as already mentioned, is Proof-of-Work, i.e. Classic mining using hardware (CPU, GPU, FPGA, Asic) and the second type of mining Proof-of-Proof is completely software, requiring Bitcoin to record the status of its own blockchain in the Bitcoin blockchain.

Veriblock itself can be said to be a demonstration of the work of the technology under the same name, since Veriblock can use any public blockchain to solve problems with the security of its network.

For more information on the mechanism of the blockchain VeriBlock can be found on the company's website.

We will analyze the mining of this cryptocurrency in more detail and start with a simple one, i.e. with POW mining. 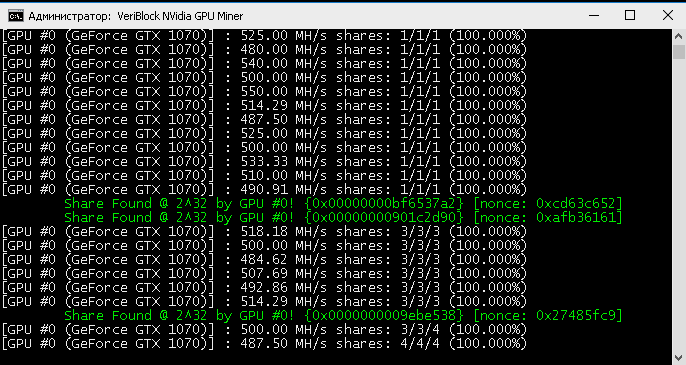 The time of each block in the network is 30 seconds, and the reward for the found block is now 82.5 VBK.

The current hashrate of the network is now 24.4 TH / s, you can see these and other parameters of the blockchain yourself in Explorer Veriblock.

For a GTX1080ti video card with a 900 MH / s hashrate, we get about 9 VBK coins per day. If you take the price of IEO where VBK was selling at 0.1USD per coin, then the profitability of such mining at the moment can be estimated at 0.9 USD per day from a single GTX1080ti video card, which is slightly lower than the currently popular RVN and GRIN. But it is necessary to take into account the moment that after the appearance of Veriblock in free sale on cryptobirths, the price for this asset can both actively grow and depreciate in comparison with the price for IEO.

Therefore, here everyone evaluates for himself all possible risks associated with the mining of non-tradable cryptocurrency.

If you decided to do POW mining Veriblock, then you need to download the official Node Core application and miner on GitHub to get the cryptocurrency storage address

For Nvidia graphics cards, the Node Core POW CUDA Miner miner is used, and for AMD, the VeriMultiAMD miner is available for download on the LuckyPool.

To run POP mining on the Veriblcok network, you only need to install the Node Core application (Windows or Linux)

After starting the executable file, you will need to save the SID phrase to restore the wallet and wait for it to synchronize with the VeriBlock network and download the Bitcoin blockchain headers.

After downloading the data from the Bitcoin network, you will get access to the internal Bitcoin wallet, which must be replenished with BTC to start POP mining. 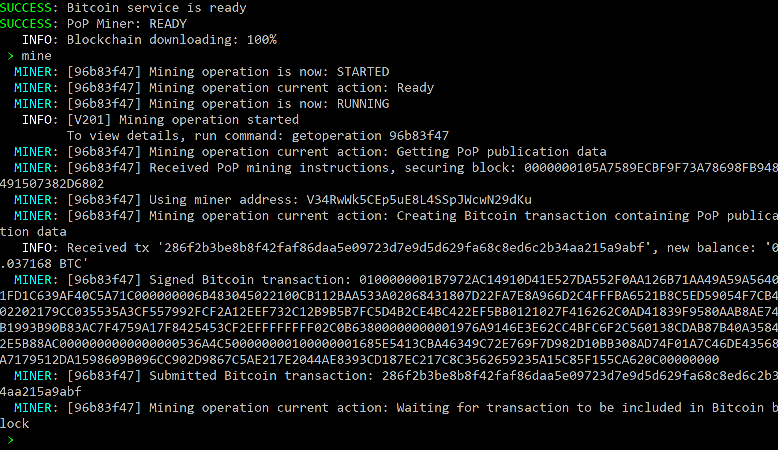