The previously unknown new cryptocurrency Chia suddenly burst into the information space through all channels, because of which we are all promised the same shortage of SSD and HDD drives as with video cards. The Chia project is led by Bram Cohen, the creator of another cryptocurrency Bittorrent (BTT), which has also been widely rumored recently due to the sharp rise in its value on cryptocurrency exchanges. In this article, we will try to figure out what technological innovations this cryptocurrency gives and why all SSDs and HDDs will disappear from sale.

Chia cryptocurrency marketing is built on two main pillars - blockchain and the use of green technologies. If everything is clear with the blockchain, then the developers have incorporated the use of data storage devices in green technologies, instead of video cards and ASICs. That is, to maintain the operation of the Chia blockchain in working order, much less electricity is consumed. As a proof of work, instead of the well-known POW and POS methods, the Chia cryptocurrency proposes to use a new rule called POST, which stands for Proof of Space and Time.

POST is a hybrid of the two technologies. The first technology is Proof of Space, which uses the free space of SSD or HDD drives. In the process of plotting or seeding on the SSD, an array of data is formed in which various hash sums are written, then in the process of mining these hashes are read and compared with the condition for finding the next block, and if the hash sum written to the SSD meets these requirements, then it is considered that the block is found and the miner or the farmer (in local terminology) will receive an award of 5 XCH.

The above technology is not particularly new, since Back in 2014, the BURST cryptocurrency used exactly the same principle, only it was called Proof of Capacity (POC).

The seeding process (plotting) requires a sufficiently powerful processor and a fast SSD, otherwise this process can take several days. But even with sufficiently modern equipment, generating 100Gb files for CHIA pharming takes about 10 hours.

You can find out the seeding speed for different equipment in a special Google document created by enthusiasts. With which you can estimate the speed of creating files for CHIA farming for your equipment.

Because during plotting, hashes are constantly read from the disk, then the read speed also matters, therefore SSD disks have an advantage over HDD. But the lower cost of 1TB for HDDs gives a faster payback even if the HDDs are included in RAID 1 (parallel connection to increase speed).

For faster generation of farm files, you can use an SSD, and then transfer the generated files to the HDD.

Another nuance in CHIA mining (pharming) is the lack of public pools, to which you could connect your free couple of hundred gigabytes to the 485 Petabytes already available on the network. With such a volume, the theoretical time for a block to be in solo farming will be about 1 year. What would be a more acceptable time period for finding a Chia block of the order of 1-2 months, you need 50-100TB of free space now.

Updated: there is a public pool https://www.hpool.com/statistics/chia

If you go to the site https://www.chiaexplorer.com/ , then there you can see a list of TOP pools, but these are not pools in our usual sense. At the moment, these are personal pools in which several computers are combined, network storages, tk. In CHIA software, you can combine free space on disks in different devices on the same network using folder sharing.

The second type of mining Proof of Time is not parallel, i.e. it makes no sense to install several computers at home for block validation in the CHIA network, since the fastest device will always perform this operation. Those. will affect the speed of the Internet (PING) and the speed of information processing by your computer. Whoever completes this task first will write the found block into the blockchain. Therefore, there will not be many Proof of Time validators and they will all the time compete in the speed of data processing.

As a result, I would like to say that CHIA is not something fundamentally new in comparison with the cryptocurrency BURST, which is not very popular now, like the more advanced cryptocurrencies SIA and BitTorrent. BitTorrent in this list stands out a little against the background of BURST and SIA, because the creator of Bittorrent Bram Cohen participates in the development of CHIA, and to everyone's surprise, a few days before the hype around CHIA, Bittorrent rises in price 10 times sharply. Clearly showing an example of the "demand" for such solutions in the market.

Further, the subsequent news agenda with the disappearance of SSD and HDD in China with the mention of the CHIA cryptocurrency clearly pursues the same goals as the generated excitement around the sale of video cards and powerful power supplies. But even taking into account this obviously artificially created excitement around CHIA and the expected shortage and rise in prices for SSD and HDD, the CHIA cryptocurrency still seems to have a chance of success, at least for a short time, due to the large amount of money that is poured into advertising for this cryptocurrency. Because Now all news publications around the world are talking and writing about CHIA cryptocurrency at least somehow related to computer technology.

A recent example of this approach is the SAFEMOON cryptocurrency, with its sharp rise in value by thousands of percent during the advertising campaign on TikTok and the same sharp collapse after the end of the advertisement. 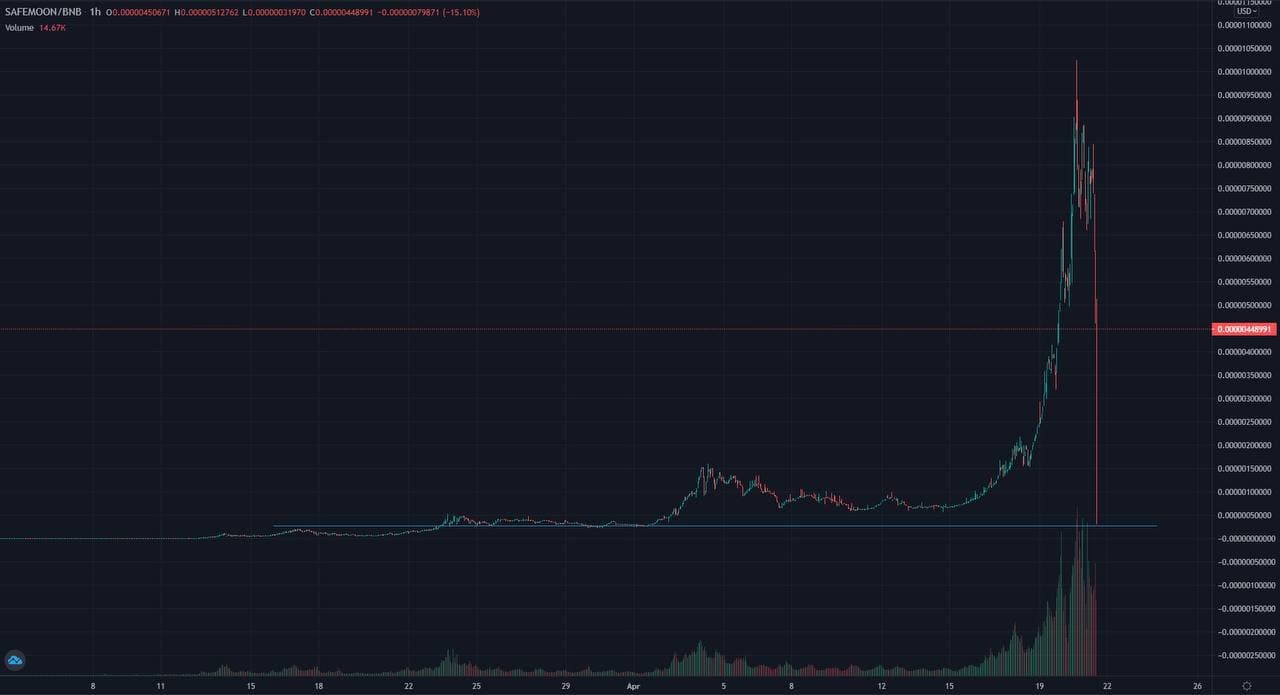 Unlike Safemoon, CHIA cryptocurrency is still in the warm-up stage and it is quite possible that miners and traders can earn money on this. If you are interested in this cryptocurrency, then you need to carefully monitor its appearance on various trading platforms, because with the appearance of CHIA on Binance or other well-known crypto exchanges, it may mean a sharp cessation of advertising for this cryptocurrency and, accordingly, the same sharp drop in interest in it.