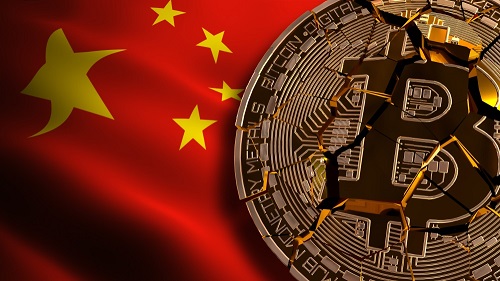 The end of spring and early summer of 2021 in the world of cryptocurrencies will be remembered by everyone for the sharp redistribution of the mining market due to its ban in China, which, according to forecasts, accumulated more than 50% of the total hashrate of popular cryptocurrencies: Bitcoin and Ethereum. The peak values ​​of the hashrate of the BTC and ETH network were recorded at the end of May 2021: 643TH/s for Ethereum and 198Eh/s for Bitcoin. The Chinese government has launched a fight against mining due to energy savings and the development of cleaner production. And for this they need electricity from hydroelectric power plants, which almost entirely went to the operation of mining equipment. Since the ban on mining cryptocurrencies in China's Inner Mongolia region at the end of May and the largest mining area in Sichuan at the end of June 2021, hash rates of both cryptocurrencies have been falling steadily.

The graph of the hashrate change in the Bitcoin cryptocurrency network June 2021: 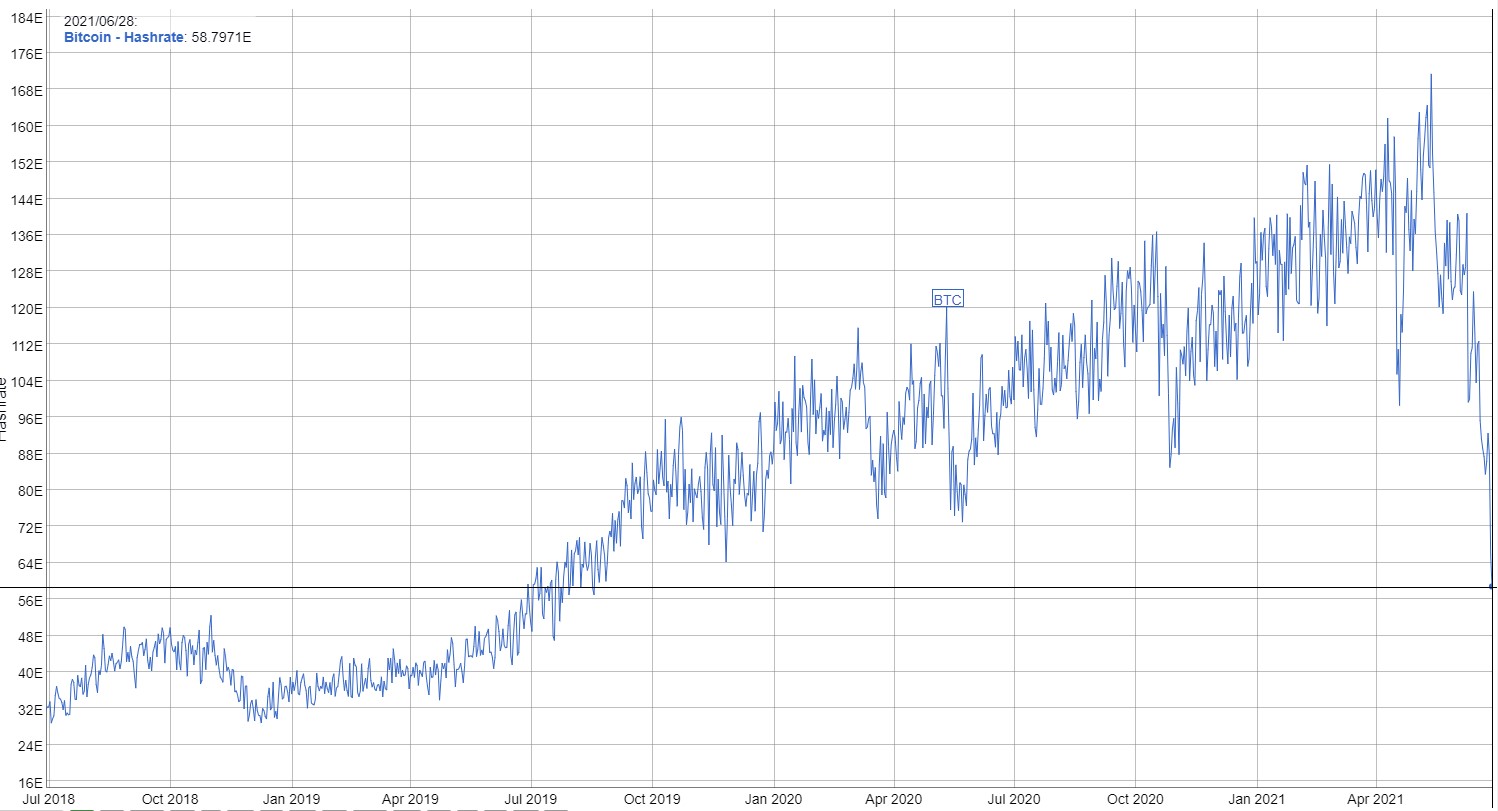 The hash rate on the Bitcoin network has dropped to the level of the summer of 2019.

The graph of the hashrate change in the Ethereum cryptocurrency network June 2021: 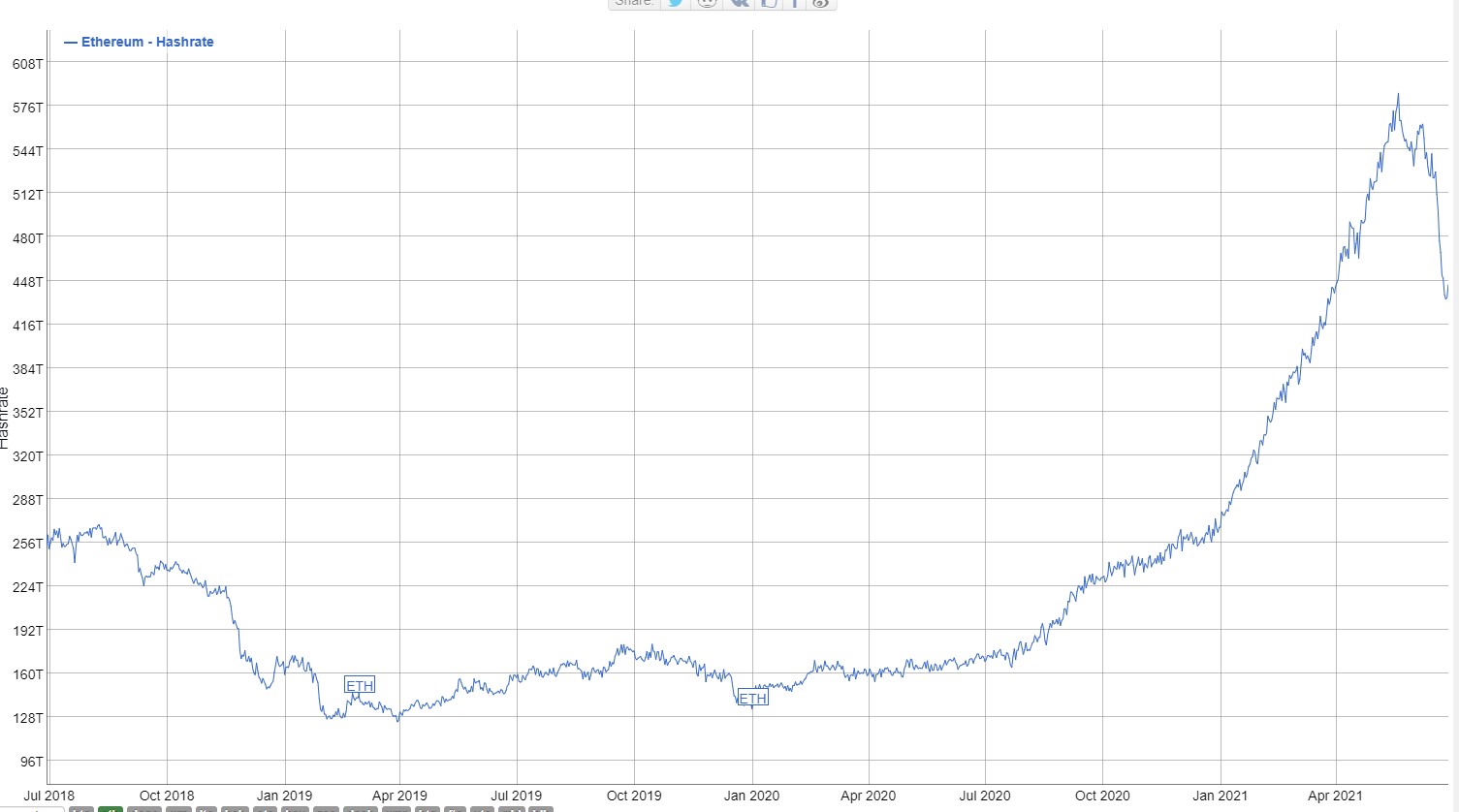 The hashrate on the Ethereum network dropped to the level of March 2021.

We can say with complete confidence that the Chinese mining market turned out to be much more than 50% of the world market and even more than 70%, since only large farms in China turn off their mining farms.

But even taking into account the shutdown of only 70% of the hashrate of the Bitcoin cryptocurrency, the Chinese authorities will be able to redirect about 80 TW/h to industrial production and, first of all, metallurgy, which use dirtier sources of electricity - coal power plants. That will reduce the carbon footprint of manufactured products in order to reduce the tax on their products in Europe after the introduction of an environmental (carbon) tax, which may be introduced as early as 2022.

The restoration of the Bitcoin and Ethereum network can take a long time, since No country can offer the required amount of free electricity in the world. For your reference, China is the world leader in electricity production.

Top countries for electricity generation in the world:

But even if you find a site with cheap and affordable electricity, then it will take more than one month to move 80 TW/h or about 5,000,000 Asic miners of the Antminer S19 level.

The first countries that began to accept refugees from China were Kazakhstan and the United States.

Such a global change in the main characteristic of cryptocurrencies, such as hash rate, did not go unnoticed in the cryptocurrency market, where the price of crypto assets corrected two or more times from the peak values reached in May 2021.