How POS mining works on the Ethereum 2 network. Synchronization committee and light clients after the Altair hardfork.

Classic POW mining on processors, asics and video cards has existed since the emergence of Bitcoin in 2009. POS mining has also been around since 2012 (PPCoin cryptocurrency), but Ethereum's much-anticipated transition to POS mining will have little to do with what we have come to understand as POS mining. Ethereum 2 POS mining is not just storing a certain amount of cryptocurrency on a wallet or node, but also performing the necessary calculations to maintain the network in working order and protect it from hacker attacks. In other words, POS mining in Ethereum network will be a kind of symbiosis of POS and POW mining, where there will be no concept of network hashrate, i.e. there will be no need to constantly increase the capacity of your equipment to compete with other miners. Hacking protection will now be based not on the difficulty of getting 51% hash capacity, but on running 51% number of nodes with a balance of 32ETH for each node. Therefore, the power of your hardware is of secondary importance, you only need to provide a minimum level of performance and further capacity increase will have no effect whatsoever. As of today, the ETH2 network contains 250.480 validators, or 8.239.286 ETH, which means that 51% of the validators would need to be controlled, which means that to attack the ETH2 network you will need 125.000 validators, or 4 million 200 thousand ETH (17 billion dollars at the current exchange rate). That's a lot of money. But even if someone wanted to carry out such a plan, 51% of the validators would not be enough, because there are so-called committees in the ETH2 network.

A committee is a randomly selected set of validators that confirms a block entry into the blockchain; committees are shuffled every 32 slots - this is called an epoch.

A slot is a time interval in which blocks are examined for validity to be written to the blockchain, and slots can be empty. In other words, a slot is a block in the usual sense of POW mining.

In order to hack the Ethereum 2 network, all validators in a committee must belong to the same owner, which is not feasible, even with 51% of all validators to hack, due to the completely random selection of validators into the committee. In addition, there is a check on each validator to make sure it meets certain conditions, which makes it even more difficult to attack the network. If a validator does not meet certain requirements, it is excluded from work and fined, and the validator who found and excluded a violator from the network gets a bonus for this.

So, it turns out that a 51% attack on the ETH2 network is not realizable.

The reward for POS mining in the ETH2 network consists of several components: validation (finding) of blocks, checking slots in committees. 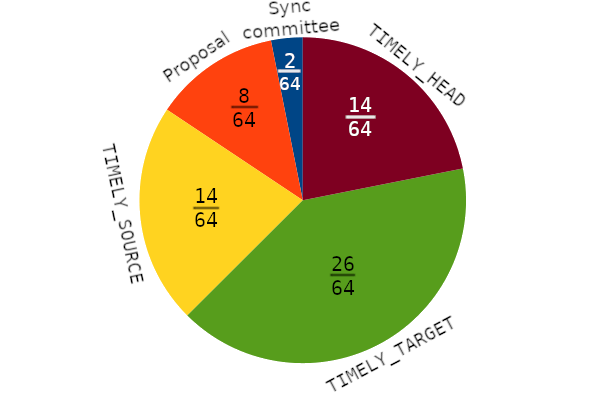 Distribution of awards in the ETH2 network after the Altair hardfork

It's worth noting that validators will only be paid if they have the current version of software installed on the server and the server itself will be available 24/7. Otherwise (the server with ETH2 node is not installed or is offline) the validator will not earn money, but will lose the same amount of money.

The Ethereum 2 cryptocurrency network called Beacon chain, which will replace the current Ethereum POW network in the future, recently went through its first Altair hardfork. The main innovation of which was the support of light clients, i.e. now the launch of Ethereum 2 is possible even on the most ordinary smartphones or low-powered computers like Raspberry Pi. That the network of Ethereum cryptocurrency at the transition to POS had the greatest distribution, i.e. became available to a wide range of users without intermediaries.

To fully work Ethereum Validator 2, let us remind, it is necessary to have at least a 4-core computer with 8Gb of RAM and 500GB SSD. Such quite serious requirements for a full-fledged ETH2 node can be explained by the fact that it is necessary to run a node for ETH1 network and for ETH2 network at the same time. And the SSD size requirements will be constantly increasing to store the blockchain of the POW network and POS network. In 6 years the POW network blockchain has grown to 312Gb, the ETH2 blockchain in less than a year already takes about 50Gb.

The SSD size requirements above are not for fully functional nodes, as there are also archive nodes that store the full state of the blockchain at any given time and take more than 9Tb for ETH1 and more than 1TB for ETH2. Such nodes usually run full-fledged cryptocurrency blockchain analysis services like Etherscan.com.

But even if you want to have minimal possible node for POS mining, you will need to pay about 50 USD per month for VPS server maintenance or to keep your server at home with 100% uptime, because for every idle minute you will pay penalty, i.e. you will lose money for not having your validator on "workplace".

Payments to the validator for participation in the synchronization committee

It should be noted that if a validator is not on the network when it is assigned to the sync committee, it will receive the same 18 times the normal penalty.

You can read more about how light clients work in the Beacon chain network on Github.

Conclusion: We have considered only a small part of how POS mining works in Ethereum 2 network, literally only the main points so that you can understand how Ethereum mining on video cards differs from POS mining. We also didn't talk about the shards and how both chains ETH1 and ETH2 will be merged into one blockchain. There are still many risks on this way, both technical and political, legal and social, but one thing is clear already now, that new POS consensus of Ethereum cryptocurrency meets several requests of current cryptocurrency community - it is scalability of network, environmental friendliness and accessibility. What cannot be said about the current state of Ethereum, which clearly cannot cope with the current load on the network, as evidenced by the high price of gas. Which does not allow to use smart contracts for crypto-enthusiasts with small budgets (less than 1000 USD), because the commission with using a smart contract can be 100 USD or more. With Ethereum's transition to POS and lower gas price, reduced load on ecology due to POW mining, Ethereum will deprive other similar cryptocurrencies with smart contracts (TRON, Binance smart Chain, Solana), which are now used primarily because of significantly low commission, of the advantage, which may give new impulse to Ethereum cryptocurrency reaching the title of number one cryptocurrency in the world.