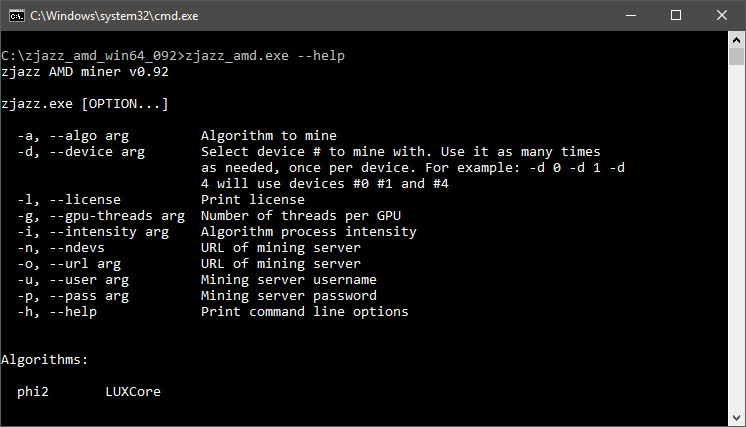 If you are interested in LUXcoin (LUX) mining on AMD video cards, then you are probably upset that for the PHI2 algorithm used to mining this coin, there are not so many software-miners, not to mention that this algorithm is dominated by NVIDIA. Nevertheless, the developers are working to ensure that the AMD GPUs can also show decent performance on the PHI2 algorithm. Currently, for owners of rigs based on AMD GPU there are two solutions. The first is a fork sgminer-phi2-fancyIX with support for PHI2 and open source and the second one is a miner for Windows - zjazz AMD miner with a closed source code. The second option is slightly faster than the first, but has a closed source code.

Zjazz PHI AMD Miner is a completely new miner that has a closed source code and 1% commission of the developer, which is currently only available as binaries for Windows. Miner supports only modern graphics processors AMD, series RX400 / 500 and VRGA. This miner is currently the fastest for the AMD GPU.

The open source developer, developed by fancyIX, is a little slower than the previous one, but with each new beta version, performance only increases, which can not please AMD cardholders. Also, the fact that this open source code has binaries for Linux, as well as there are no built-in commissions, is also encouraging. Miner also works on older AMD graphics cards, although with not very high performance. You can follow the development of this fork in branch on BitcoinTalk.