The Ethereum POW cryptocurrency appeared as a fork (copy) from the original Ethereum, after it abandoned POW mining on video cards and ASICs and switched to POS mining on September 15, 2022. Ethereum POW, as the name implies, has remained true to POW mining and, as the developers promise, there will be no commission burning in ETHW and the complexity bomb will be removed, i.e. miners will receive another Ethereum clone similar to Ethereum Classic (ETC), but only with a large 5Gb DAG file and all the updates that were in the original Ethereum since 2016, when ETC appeared. We are more interested in the possibility of mining ETHW and the material part of this transition, because. mining ETHW is now about 10 times more profitable than any other options. Therefore, let's take a closer look at how to start mining Ethereum POW.

To start mining any cryptocurrency, you need equipment, software, pools and a wallet where ETHW coins from the pool will be credited. Because ETHW is a complete copy of Ethereum, so the settings for mining rigs for the new coin will be minimal.

For ETHW mining, you can use the same video card settings (frequency and voltage for memory and core), the same miner programs, all that remains is to reconfigure the miner program in your operating system, find a suitable pool and ETHW wallet.

Let's deal with everything in order.

When switching from ETC or ETH mining to ETHW, you will not need to make any changes to the operation of your mining equipment. Otherwise, all video card settings are performed in the same way as for Ethereum.

Because ETHW uses the same Dagger-Hashimoto mining algorithm as the original Ethereum, then the choice of the miner program will be exactly the same. For example lolminer, T-Rex-TeamredMiner, NBminer and others

To mine ETHW, you can use any of the many pools that support Ethereum POW

and many other pools depending on your preference.

Getting a wallet is a mandatory process in order to start mining, because. it is to the address you specified that ETHW coins from the mining pool will be credited.

The wallet address for ETHW deposit can be obtained in several ways:

The first way is to install a full ETHPOW node on your computer, which can take several days to download the entire 700Gb blockchain. Not the most convenient way, so we do not recommend it

The second way is to set up a Metamask wallet. it already supports the ETHW network. Suitable primarily for those who store their Ethereum on Metamask, because. You will automatically receive the same amount of Ethereum POW.

The third way is to use the address of an exchange that has already opened a deposit in ETHW:

The setup in Windows is to edit the .bat file, where you need to specify the address and port of the new pool, as well as specify the new ETHW address (wallet) for the deposit.

Setting up RaveOS and HiveOS is a bit more complicated as First you need to add the ETHW coin yourself. It is created as an arbitrary new coin with settings from Ethereum, with the only difference being that the pool and wallet address will be different.

Now let's get down to the most important thing, for which all this was started, namely, the calculation of your income from mining the ETHW cryptocurrency.

We go to the ETHW mining calculator, where we indicate your hashrate and power consumption. It may also be necessary to indicate the price of ETHW if the required column indicates 0 instead of the real price. The value of ETHW can be viewed on any exchange, such as Bybit.

With the current value of ETHW at 12 USD, the income per day from one RX580 video card will be 19 USD.

Data on price and network hashrate may not be accurate. 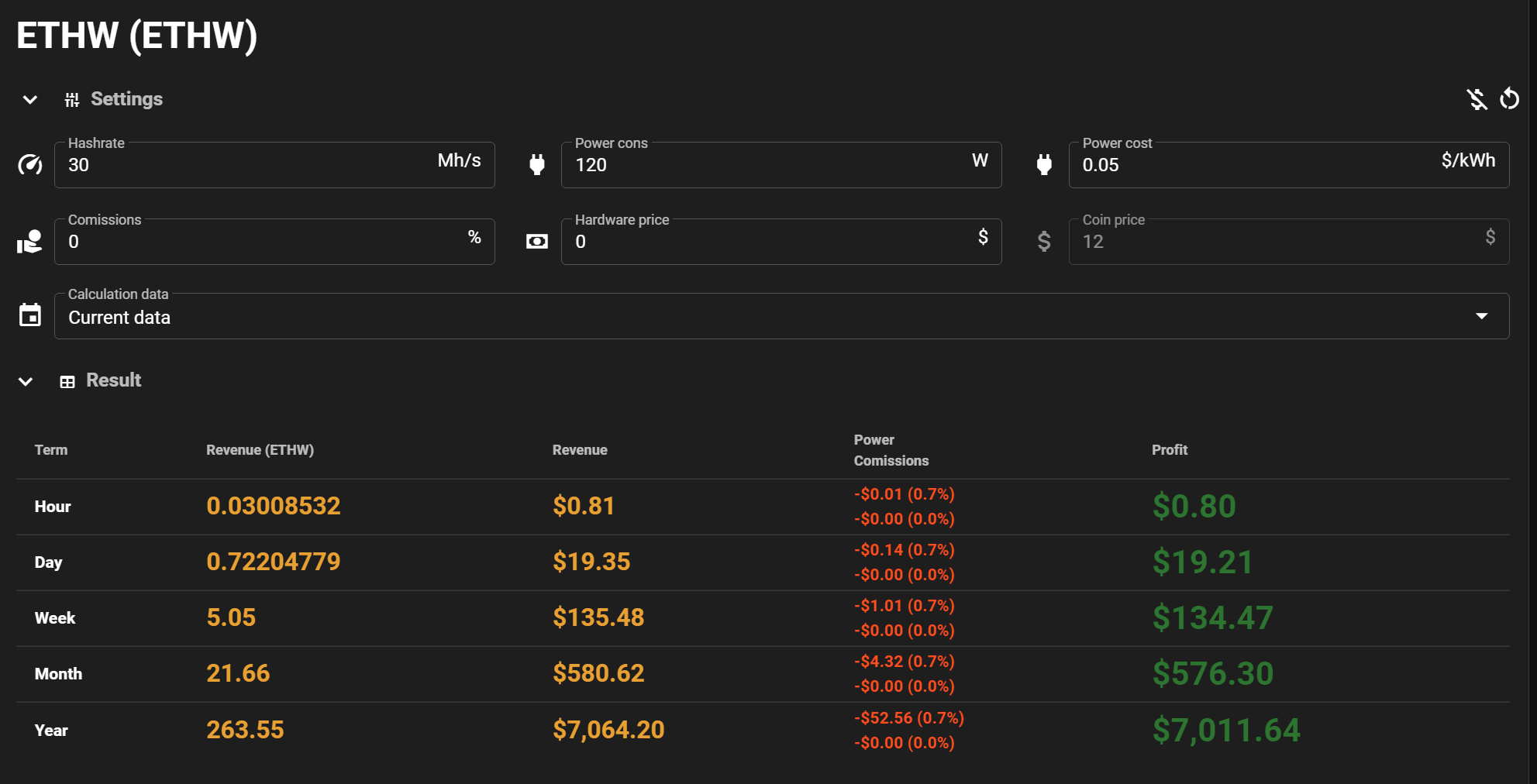