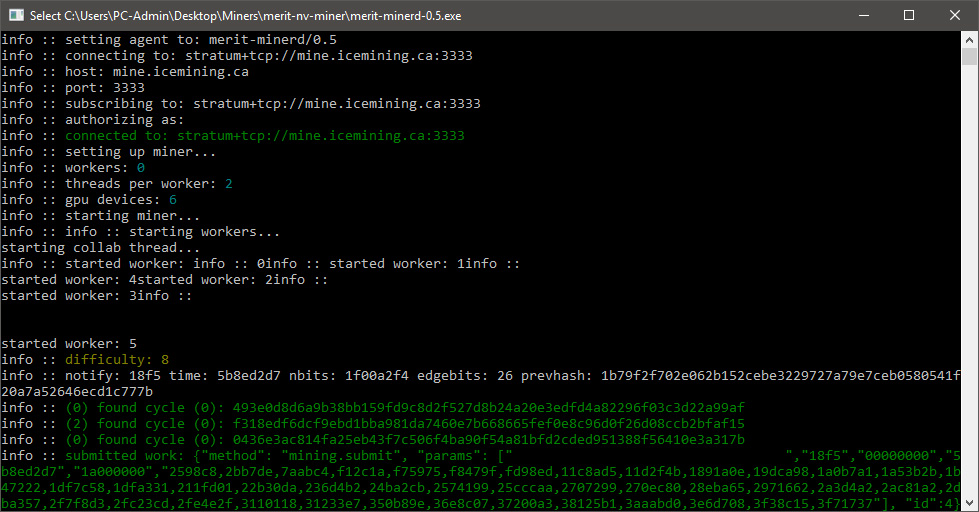 Recently we already wrote about the new MERIT crypto currency, where besides traditional POW mining, a new algorithm combining POS mining and reward for inviting friends was applied. By the way, to get your wallet and start the process of mining you need to register at the official site Merit.me by invitation (link with an invitation). Only after this, the process of mining is possible. The developers are concerned not only with the creation of the crypto currency itself, but also with the basic infrastructure around this coin. One such solution is the MERIT miner.

In version 0.5 MERIT miner, developers slightly improved the performance for INTEL (Pentium and Core) processors. This miner supports mining on NVIDIA video cards, which are about 10 times more productive on the original algorithm Cuckoo. The main problem of this miner was frequent crashes due to which there were downtime of equipment, which of course tried to solve in the new version. What was possible, but not to the end, because crashes continue, but not as often as before.

To solve the problem with the downtime of mining rigs when mining MERIT, you can use a special BAT file to restart the program every 1800 seconds.

Another solution is using a third-party zjazz CUDA Miner, which is more stable and a bit faster. Zjazz has one drawback - it requires a lot of memory to run if there are a lot of video cards in the rig. To run a single thread, the program consumes almost 3GB of memory. For a rig of 5 video cards and when starting in two streams, 30 GB of RAM is required. Most likely this amount of RAM you will not have, so boldly increase the swap file in Windows up to 40 Gb and more, depending on the number of video cards.