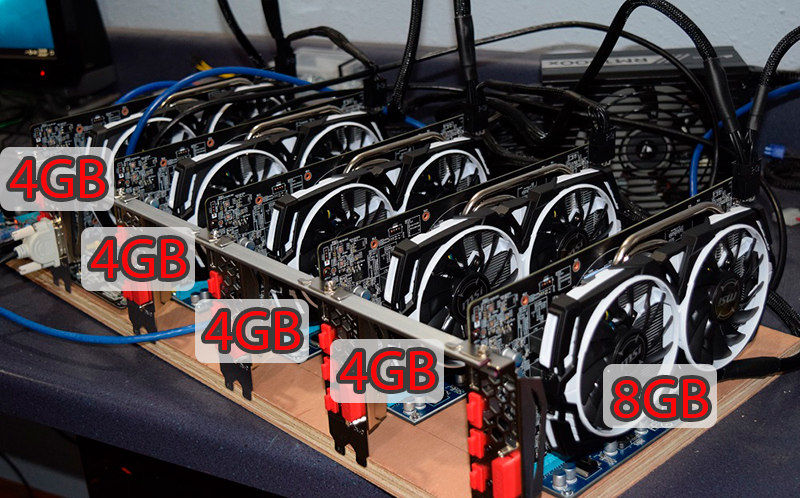 Ethereum, a popular cryptocurrency for miners, uses the Dagger-Hashimoto mining algorithm or simply ETHash, for which a special file must be loaded into the memory of the video card - DAG file. He, in turn, tends to increase in size after a certain period of time, called epochs. As of July 22, 2020, there is an epoch 350 on the Ethereum network, and the DAG file size for this epoch is 3.73Gb. In 2015, when the Ethereum cryptocurrency had just appeared, at the zero epoch the DAG file was exactly 1Gb, so in 2015 video cards with 2Gb video memory could mine this cryptocurrency, but already in 2016 miners with such video cards began to receive the message "Creating one big buffer for the DAG" symbolizing the lack of video memory for creating and storing a DAG file in the video memory of video cards with 2Gb. In 2018, the same fate befell the owners of video cards with 3Gb video memory, and in 2020, as you might have guessed, 4Gb video cards AMD RX470, RX480, RX560, RX570, RX580 and Nvidia GTX1050Ti, GTX 1650, GTX 1650 Super will finally leave Ethereum mining.

The DAG file will reach 4Gb size in late 2020 - early 2021, but the lack of 4Gb video memory for mining will come much earlier. In addition to the DAG file, the memory of the video cards stores the data necessary for drawing the OS interface, auxiliary data and the miner buffer, and the more space this data takes, the faster your video card disconnects from Ethereum mining.

At the moment, only miners using windows 10 OS face the lack of VRAM (Not enough VRAM for DAG). this operating system uses the most video memory for its own needs. The cardinal solution to this problem is the transition to Linux OS, for example HiveOS or any other OS based on Linux. You can see an overview of operating systems for mining in this article: Choosing OS for mining cryptocurrencies on video cards

Switching from Windows 10 to Linux will give you the maximum period for mining Ethereum on 4GB video cards, but if you are not yet ready for such changes, you can use some of our tips that will extend the use of Windows in Ethereum mining.

As we have already reported, even the most drastic measures will not help you mine Ethereum using 4Gb video cards already in December 2020, so you need to be ready to switch to other mining algorithms and, accordingly, other cryptocurrencies, which may not be as profitable as Ethereum in the long term. Or even now, without waiting for the error of lack of memory - cannot write buffer for DAG, replace all your video cards from 4Gb with similar or newer ones with 6Gb or more.