Income from mining on video cards. Factors affecting the payback of equipment. 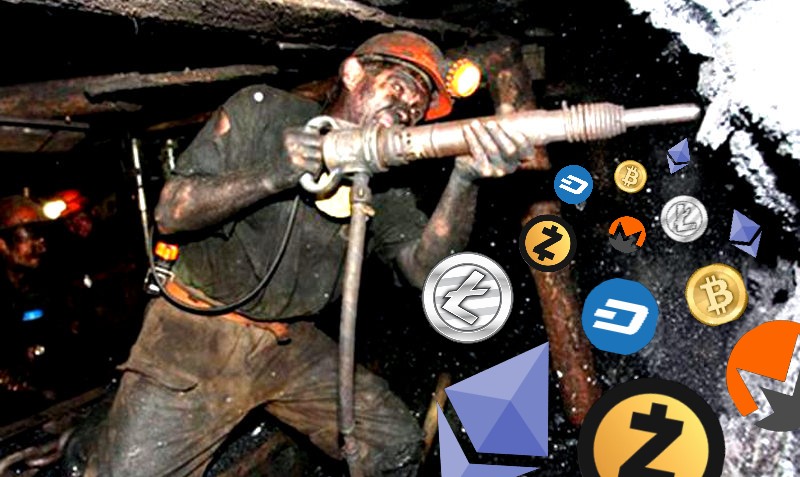 When a cryptocurrency once again hits new records in its value, the excitement around cryptocurrencies is observed not only on crypto-exchanges, but also in computer stores, where video cards, power supplies and other elements necessary to create a mining rig on video cards are bought for a clean one. Such an increased demand for video cards is due to the high profitability of mining and the rapid payback of equipment. When a person who has not previously encountered mining sees on mining calculator sites the profitability figures of 300% per year or even more, then, not knowing the many nuances of how such calculations are made, he can make a big mistake by buying equipment at an inflated price in the hope of a payback at 3 months, which are drawn to him by various mining calculators. Further in this article, you will learn about all the factors that affect the income from mining on video cards and how they can affect the payback of mining equipment in the future.

What is mining and why is it profitable.

A detailed explanation about the technical component of mining and why you need it can be read in this article: What does a computer do when mining cryptocurrencies in simple words. Now we will pay more attention to financial issues.

If you read the article recommended above, then you already know that miners receive a reward in every block they find for keeping the network up and running. The reward is paid in the same cryptocurrency, the network of which your video cards or ASICs support. Mining income, respectively, directly depends on the value of the cryptocurrency that you are currently mining. From here, beginners get confused that the higher the price for a cryptocurrency, the more profitable it is to mine it. This condition certainly works, but not always and not as straightforwardly as one might think.

The costs of maintaining the operation of mining rigs add up mainly to the payment of electricity and the Internet. The scalability of the mining business is also very simple - just buy more video cards. The main limitation is the electrical power input and the cost of electricity. If you have a low cost for electricity and have access to a "fat" outlet, then consider that you already have a successful mining business. But before starting active steps to develop this area, familiarize yourself with the technical and economic nuances that you may not know about.

The main factors affecting the profitability of mining

The network hashrate and network complexity are practically one parameter with the only difference that the complexity is a calculated parameter from the network hashrate and is applied in the network after a certain time. For example, in the Bitcoin network, the complexity of the network changes every 14 days, in the Ethereum network with each new block, i.e. every 10-15 seconds. The higher the difficulty, the higher the hashrate, i.e. more miners are mining this cryptocurrency. Because the amount of cryptocurrency in each block does not depend on the number of miners, therefore, as the network hash rate grows, mining income decreases proportionally. For example, from December 1, 2020 to January 22, 2021, the hashrate of the Ethereum network increased from 291TH/s to 333TH/s, or by 14%. Those. conditional one video card on December 1 for mining received 14% more ETH than today on January 22, 2021. And this upward trend will continue as long as the Ethereum cryptocurrency rate is high. Those. having the same equipment in mining, over time, you will receive less and less cryptocurrencies.

Here, as with the price for cryptocurrency, everything is also simple. The lower it is, the less expenses you will have, the more income and faster payback of video cards. You just need to take into account your local power supply characteristics, because electricity prices can vary depending on the time of day or even the season.

Important factors in mining that are usually not talked about

1. What to expect from the hashrate

The network hashrate grows and falls with a certain time lag, i.e. with a sharp increase in the cost of cryptocurrencies, the hash rate does not grow so quickly (it takes time to buy and assemble equipment for mining), so those who have already been in the mining receive super profit from this. The fall in the value of cryptocurrencies usually happens also quickly, but the hash rate, on the contrary, slides down very slowly, because everyone who has already entered the mining will be very reluctant to turn off the equipment as long as there is at least a small profit.

Whoever buys equipment before the market falls, at the very peak, the prices of cryptocurrencies and prices for equipment, find themselves in the most unpleasant situation, because the return on investment falls sharply, several times, and the hash rate will still increase by inertia for some time, reducing the already greatly sagging profitability from mining. A sharp drop in cryptocurrencies is followed by a sharp drop in prices for video cards and other equipment, i.e. not only the payback period of video cards increases, but video cards themselves lose 50% and more in price in a few months.

For each transaction when transferring to the network, a commission is paid, which later goes to the miners as a reward along with the standard block reward. Those. the more transfers in the network, the more miners receive for mining. When they talk about bitcoin on all TV channels and in the queue for a pension, the number of transactions increases many times over, because there are more people who want to buy, sell cryptocurrency, or who want to try their hand at trading on cryptocurrency exchanges. For example, Ethereum mining includes rewards for the 2ETH block, this is the minimum that miners receive for each block found in the network. But now, when the cryptocurrency is heard, the block reward is on average 3-4ETH. It turns out only due to commissions miners earn 50-100% more than usual. When the excitement around cryptocurrencies once again declines, the commissions on the network will sharply decrease and, accordingly, the profitability of mining will also sharply decrease.

For long-term planning, so that mining would be profitable not only at 500% per annum, but also at 50%, you need to know the average price of electricity from competitors (other miners). Miners with cheap power outlets will replace everyone with expensive electricity. during the "crypto winter" with a high price for electricity, mining will not be profitable and it will be easier to sell equipment and buy cryptocurrencies than pay for electricity out of pocket. The average price for electricity at the moment is 0.05 USD per kilowatt, with minimum prices at 0.02USD per kilowatt (Irkutsk region in Russia, Sichuan province of China during the rainy season).

Any cryptocurrency is a program code behind which people stand. Who tend to make mistakes and succumb to the temptations to gain profit here and now, or to support the interests of only one group of people, for example, investors, not miners. Now Ethereum developers are discussing the possibility of completely excluding the commission from the mining reward, and instead of paying it to miners, the commission will be "burned" immediately. In this case, Ethereum miners will lose, because lose a large share of earnings, but investors, on the contrary, will benefit from this due to a decrease in ethers in the market. And these are only the nearest plans for 2-3 months, on a global scale, Ethereum will completely switch to Ethereum 2, where there will be no mining at all. And everyone who is currently extracting Ether will have to look for another profitable place.

It is also worth knowing that for mining there are minimum technical requirements for equipment, which can also change over time. As recently happened with video cards with 4GB of video memory, which from December 2020 can no longer mine Ethereum.

Every year, manufacturers of video cards and ASICs release new generations that are more productive and energy efficient. And the difference between the two generations can be significant. For example, now in Ethereum mining, Radeon RX480 / RX580 video cards produced since 2016 are still popular, but there are also newer Radeon RX5700 models (2019) on the market, they, in turn, give out twice as much hash rate 60MH/s, instead of 30Mh/s with the same power consumption. When the amount of newer equipment in mining begins to dominate, then the older one will immediately begin to sink in profitability, because the electricity costs of old card holders will be twice as high. At this moment, only owners with a very low price for electricity will be able to afford mining on old inefficient equipment.

With the transition of the bulk of miners to a new generation of video cards and ASICs, the network hash rate also grows, regardless of the cost of the cryptocurrency itself, which also needs to be taken into account. In short, the hashrate of popular cryptocurrencies in the long term will only increase and you are unlikely to succeed in mining on equipment released 5 years ago, even if you have the lowest cost per kilowatt of electricity.

Therefore, the costs should include not only the cost of electricity, rental of premises, salaries, but also the rapid depreciation of equipment in 2-3 years.

Like all electrical equipment, mining equipment requires special climatic conditions to operate. This is usually between 0 and 25 degrees Celsius with moderate humidity. In hot and humid climates, there are additional costs for air conditioning and dehumidification of premises in order to maintain the temperature regime in the norm. Because video cards and ASICs themselves emit a lot of heat during operation, then the power of the air conditioning system should be several times more than for ordinary rooms. And this is the additional cost of electricity that many people forget about.

Sites calculators for calculating the profit from mining cryptocurrencies take only current data on the price, network hash rate, commissions and do not take into account that all data for the calculation may change over time. And if you see that now the income from one video card is 5USD, you will receive 150 USD per month, and 1800 USD per year. This does not mean that in just an hour your income will remain the same, even if the price of the cryptocurrency has not changed. About the accuracy of calculating the payback of equipment in mining for a month can be said very conditionally, since this calculation is larger for a better representation of the current profitability, rather than the actual expected mining income during the month. Calculations of the payback of equipment for the year can not even be looked at, although it is nice to see a yield of 300-500% per annum on the screen. 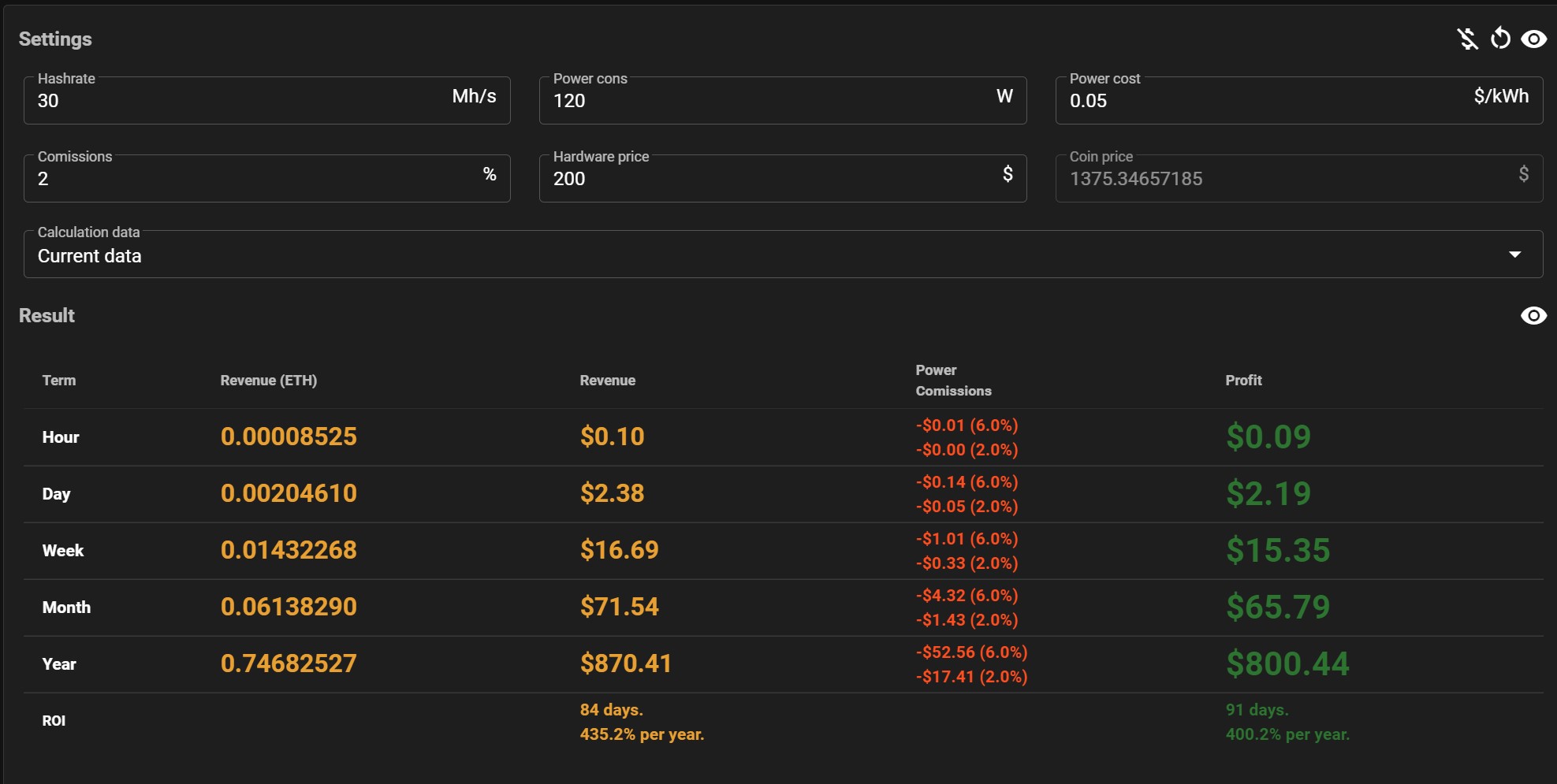 Conclusion: the output is a rather complicated formula for calculating the payback of equipment in mining, and it is far from the ideal direct dependence on the price of the cryptocurrency. When using sites for online mining calculators, keep in mind that you can only be confident in the estimated profitability during the day, and even then not always. Therefore, before you start mining cryptocurrencies, you must definitely assess all the risks and opportunities. A good argument for starting a mining business is the availability of cheap (competitive) electricity and the possibility of expanding according to energy consumption limits. Cheap electricity will allow you to survive even the most difficult times called crypto winter, survive and wait for a new wave of interest in cryptocurrencies.