HTC has presented in Germany the first blockchain smartphone called EXODUS 1. According to its specifications, the novelty corresponds to the level of the top smartphones of 2019, since built on a powerful Qualcomm Snapdragon 845 chip, has a 6-inch QuadHD + 16: 9 display and other attributes necessary for modern smartphones. In addition to the usual functions of the smartphone has several original features aimed at working with cryptocurrency.

The main element of the blockchain smartphone that you should pay attention to is the use of the Secure Enclave security chip, which can encrypt data and make it completely inaccessible to the Android operating system. To work with such data, HTC has developed a special mobile wallet Zion Wallet with the support of most of the popular cryptocurrencies.

HTC EXODUS 1 boasts another feature that will be appreciated by cryptocurrency holders. This is a unique mechanism for recovering private keys from crypto wallet, which separates the Seed phrase and stores it in several trusted accounts. Which can then be restored with the loss of the smartphone

According to HTC representatives, the EXODUS 1 smartphone will become a fundamental element of the future cryptointern. 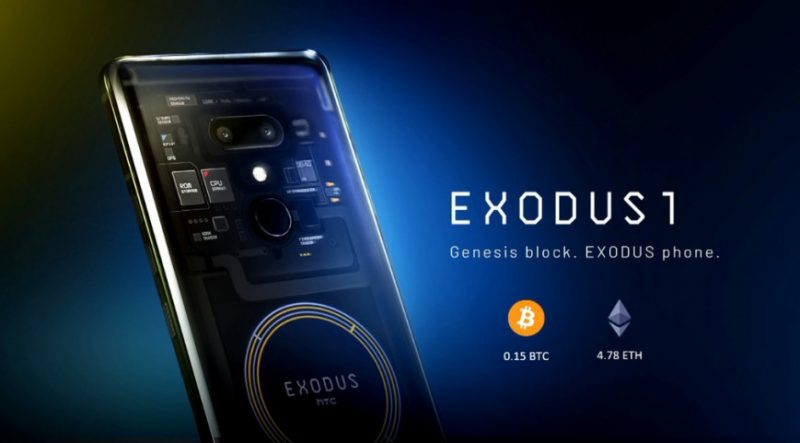 From myself, you can add that HTC has added crypto wallet-like Ledger Wallet encryption into its smartphone, while ensuring the safety of data storage at the same level as hardware purses.
Smartphone sales will begin in December, but now you can pre-order on the website htcexodus.com. Price Genesis block smartphone from HTC on pre-order about $ 1000. Approximately because the pre-order can be paid only with a cryptocurrency of 0.15 Bitcoin or 4.78 Ethereum.