MIBcoin (MIB) - a coin mined only on smartphones

An interesting cryptocurrency project appeared on the Internet, where all actions are performed on a smartphone, including mining, and we decided to check it out. MIB stands for Mobile Integrated Blockchain, where coins can only be mined using a regular Android or iOS smartphone through a dedicated application. The project came from Asia and is primarily focused on China and Korea. The MIB coin is traded on the Korean Probit exchange, as well as on the Chinese CoinBene with a daily volume of less than 2 BTC and a total market capitalization of around 50 BTC, according to data from CoinMarketCap. At the time of writing, the coin occupied 1113 place in market capitalization among cryptocurrencies.

The most interesting thing is that MIB mining is available only on smartphones, unlike other similar projects that can have a mobile miner, but at the same time mined on a CPU and even a GPU with a higher speed. For MIBcoin, there are only miners for Android and Apple IPhone. We downloaded and tested the MIB application for Android, it is also for the iPhone. Both applications are not available in official platform stores, so you will have to download them from the official MIB website. In the photo below, on the left is the usual MIB miner, and on the right is the MIB Miner Controller application, designed for smartphone mining farms. 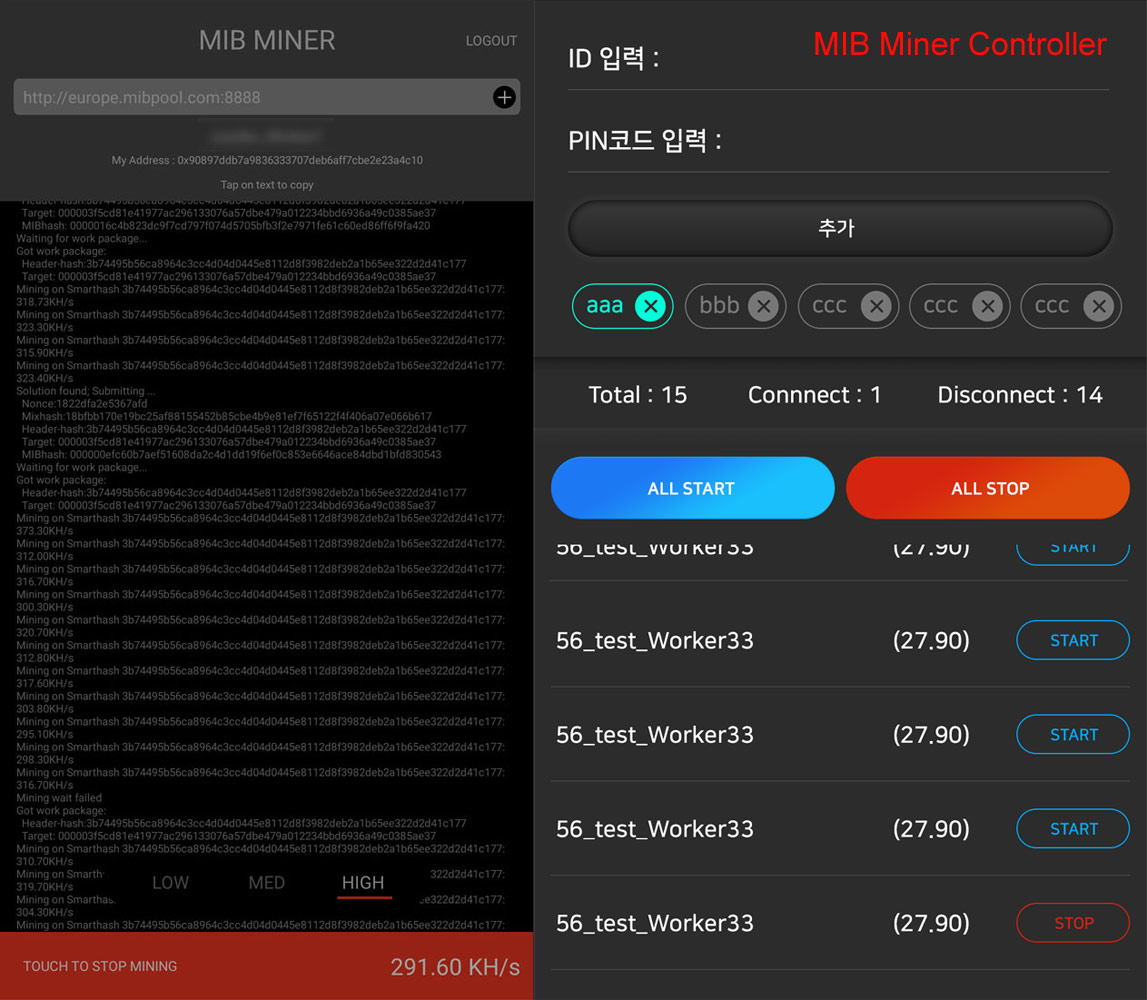 The miner itself requires you to register and create a mining wallet address. The mining part of the application is quite simple and user-friendly, with a small number of options. You can select only the pool (the pool may not be available by default, but there are several pools to choose from) and the miner’s load on the smartphone. It seemed to us that the miner is not very demanding and can run on battery power for a long time, however, when switching to another application, mining stops, so you have to constantly keep the mining application in active mode. Based on what, if you are interested in a project, it is better to have a separate smartphone exclusively for MIB mining.

You will also need to install a wallet application, and not just a mining application, since although a miner can generate a wallet for you, you will not have control over sending and even monitoring the number of coins mined. In our opinion, all the functionality in one application would be convenient for the end user. Also, we do not know how the mining process can affect the state of the smartphone over time. In addition, it is not known whether the application has monitoring of parameters such as processor and battery temperatures and whether it can stop the mining process when critical temperatures are exceeded. So far, the best that we have seen in the terminals for mobile mining software is Scala (XLA), and it would be great if other mobile crypto projects studied the SCALA client and transferred their practical experience on monitoring devices to their projects. For more information about the MIBcoin project, see the official website of the project.