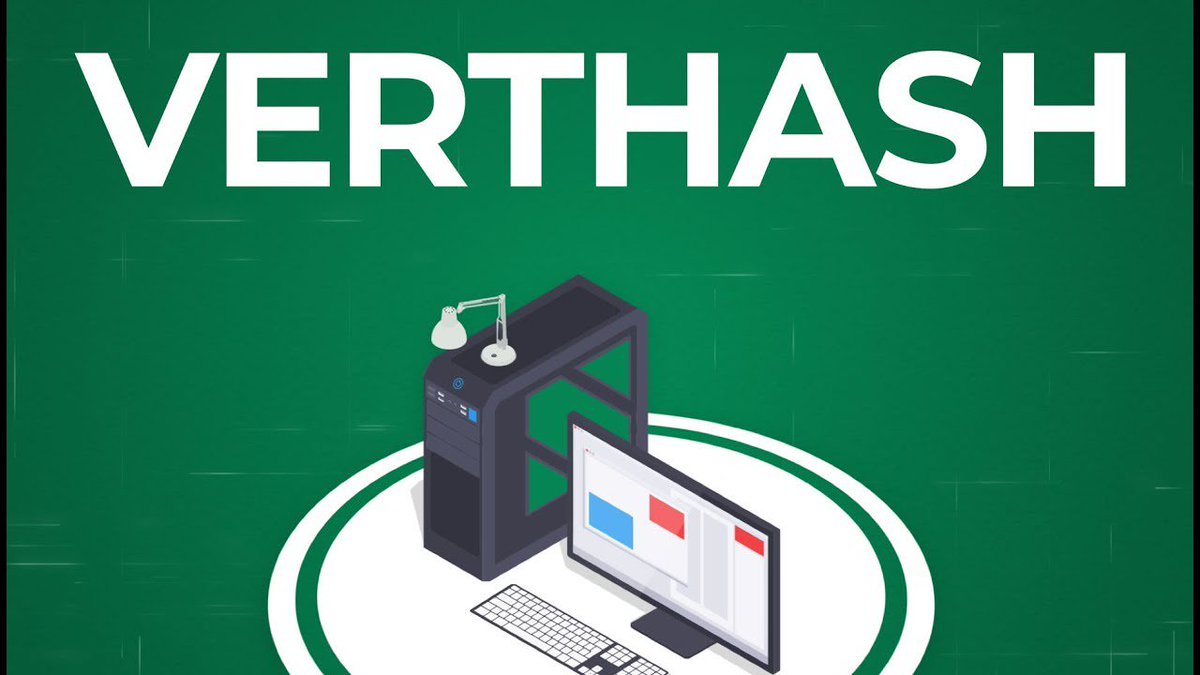 Since the recent change in the mining algorithm by hard fork from Lyra2Rev3 to the new VertHash, the profitability of mining VertCoin (VTC) has increased significantly, although it is still significantly below the profitability of mining Ethereum. VertHash is a memory-intensive algorithm, so in this case, GPU performance is not as important as having fast video memory with a wide bus. In this respect, VertHash strongly resembles the Ethash algorithm, however, the main advantage of VertHash is the fact that it requires much less memory to work, so Vertcoin can be mined on AMD Radeon RX 470, 480, 570, 580 video cards with 4GB of memory on board, which have already come to the end of their life cycle as graphics cards for ether mining. It is worth recalling that at the time of this writing, 4GB video cards can only extract air in the "Zombie mode" with up to 50% lower hash rates compared to the stock values. For example, if 8GB RX 580 produces about 30-32 Mh / s in ether mining, then 4GB cards in zombie mode are already about 10-15 Mh / s, the hash rate in this mode also drops with each new epoch. And now, thanks to the transition of Vertcoin to the VertHash mining algorithm, 4 GB cards will be able to bring some benefit (in addition, even old cards with 2-3 GB of memory on board can be mined on Vertcoin).

Here are the figures comparing profitability so far for the RX 580 4gb:

Compare mining profitability Ethereum, Ravencoin and Vertcoin you can on lite.profit-mine.com site. (the other day there was added support for calculating the profitability of Vertcoin).

It is worth noting that RX570 4gb with a stock bios gives about 350 kh / s, however, when the modified BIOS is flashed with changed timings, the hash rate rises to 455 kh/s. Therefore, you can safely use the same optimal voltage, frequencies memory and GPU of AMD Polaris (RX480, RX580) video cards as for Ethereum. 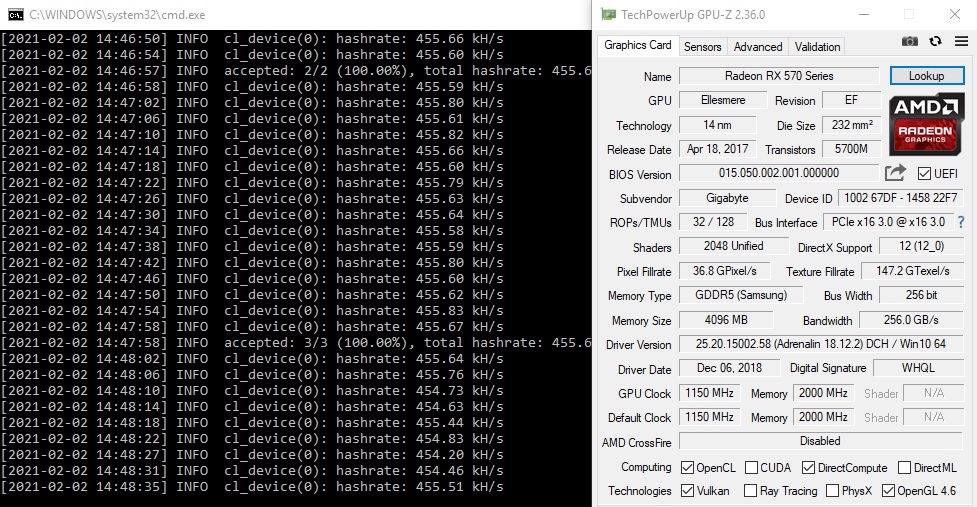 In addition, we were able to test the hashrate when mining Vertcoin for some other video cards:

For Vertcoin mining, exactly the same timing optimization or exactly the same modified BIOS that is used to increase the hash rate when mining Ether is perfect. Therefore, if you transfer 4 gig cards from Ethereum mining to Vertcoin and you have previously flashed the BIOS with it or modified the timings, then you will not need to do anything extra.

Unlike Ethereum mining, Vertcoin mining is possible even on outdated video cards with 3 and 2 GB of video memory on board, for example, on such cards as Radeon 280 (x), 290 (x), 380 (x), 390 (x), etc. The bottom line is that you can profitably use old cards with high memory bandwidth (for example, a wide video memory bus, in some old top-end models of video cards the memory bus width reaches 384 bits or even 512 bits, versus 256 bits on the RX570-580) and thus you can get a high hash rate, and therefore a good income from such "rarities".

The latest generation of video cards from NVIDIA, the Geforce 3000 series with GDDR6 or GDDR6X video memory, is even better suited for mining Vertcoin, however, these cards are still more profitable to mine Ethereum, so in this case there is no reason to transfer such cards to Vertcoin. 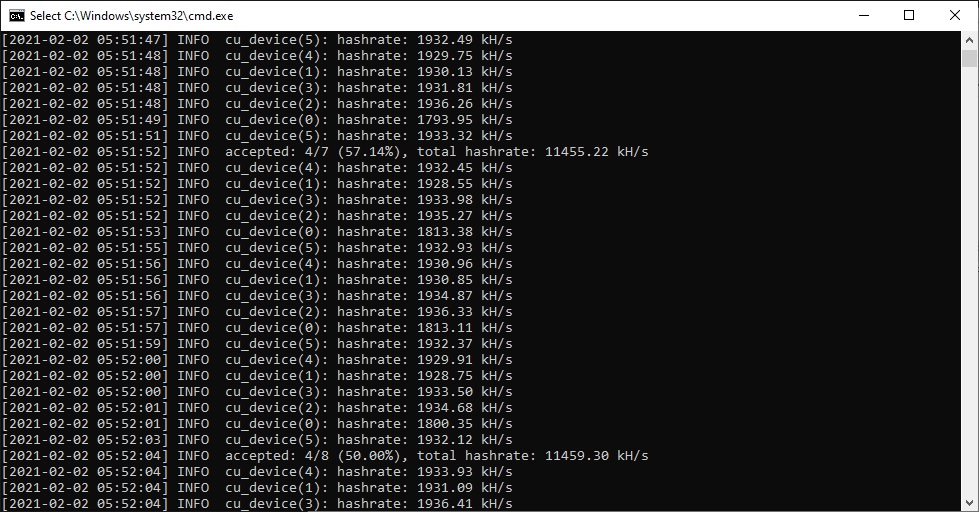 As for the withdrawal of mined Vertcoins, the largest exchange on which Vertcoin is represented is Bittrex. Unfortunately, at the time of this writing, VTC deposits on Bittrex have been temporarily disabled, however, there are a huge number of smaller exchanges that support the introduction of Vertcoin. You can download the official Vertcoin wallet using this link from their repository on GitHub.

A few days ago, an updated version of VerthashMiner v0.6.2 was released, which, although it does not provide an increase in performance compared to previous versions, but instead solves one very important problem that was present in previous versions. In the new version, you can generate a verthash.dat file in the miner itself. Now there is no need to install an official wallet to generate this file, as it was before. Now all you need to do is start a new VerthashMiner with the command line parameter "gen-verthash-data" and the name of the file you want to get (for example verthash.dat) 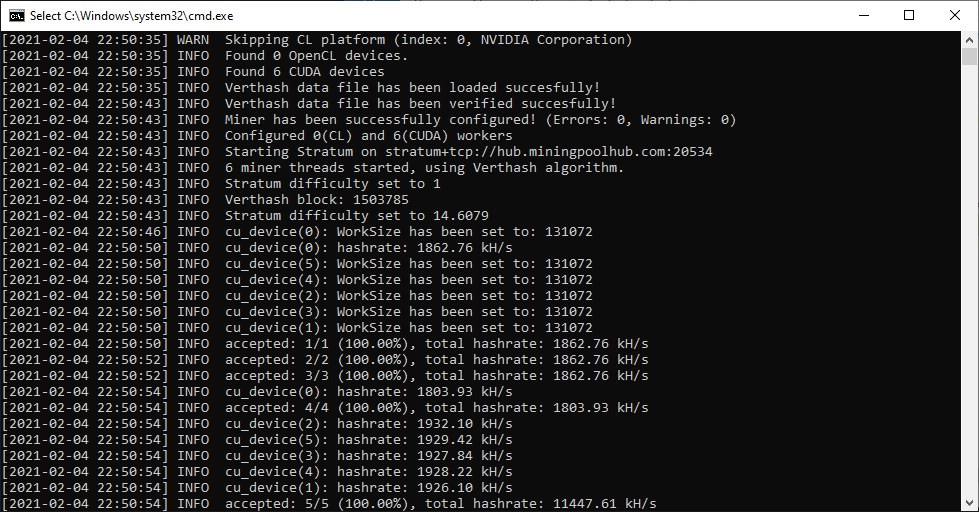 Please note that creating this .dat file is quite a resource-intensive process, and for example on a 4-core Intel Core-i5 6500T processor and SSD it can take about 10 minutes, so please be patient. Once the file is successfully generated, just run the miner in the future with normal command line parameters. You only need to generate the file once at the first start. In future starts of the mining process, the miner will use the already generated file.

SimpleMining OS recently implemented support for Vertcoin mining on a new algorithm, adding verthashminer-v0.6.2 in its latest update, but in this case .dat file will be generated every time the miner is launched. At least for now, this is the only way to mine Vertcoin not on Windows.