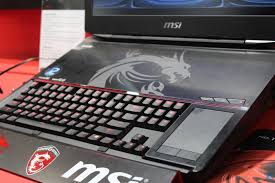 Because in the modern market now there are many models of laptops for various purposes, ranging from cheap prices from several hundred dollars and ending with gaming laptops for 10,000 or 20,000 dollars, then the performance in the mining of such laptops will vary significantly.

For mining, laptops can be divided into two categories:

The most common are laptops with integrated graphics in the CPU. This class includes all cheap and ultra-thin laptops, because The built-in video card takes up a lot of space and requires additional cooling, and more capacious batteries, which primarily affects the weight of the laptop and its price. These laptops are bought mainly for games and for working with graphics.

In laptops, they usually put special mobile versions video cards, which are about the same as the Radeon RX550 / 560 or GTX1050 graphics cards. But there are exceptions, when gaming laptops put high-grade GPU chips from higher models of video cards of the level GTX1080.

If you are a laptop owner with a built-in video card, you can find out the speed of mining and the profit obtained for you will not be difficult for you. in this case, the mining on the laptop will not differ from the mining on a full-fledged GPU farm with the only difference being that there is only one video card in the laptop. For you all developed programs for mining on the GPU will be available.

By the model of the built-in video card on the websites of the calculators Mining Profit-mine.com or Whattomine.com you can calculate your profit.

For example, take a fairly powerful gaming laptop Acer Predator with built-in video card Geforce GTX1060. On the site Profit-mine.com, let's specify this video card in the amount of 1 piece and click the "Calculate" button. 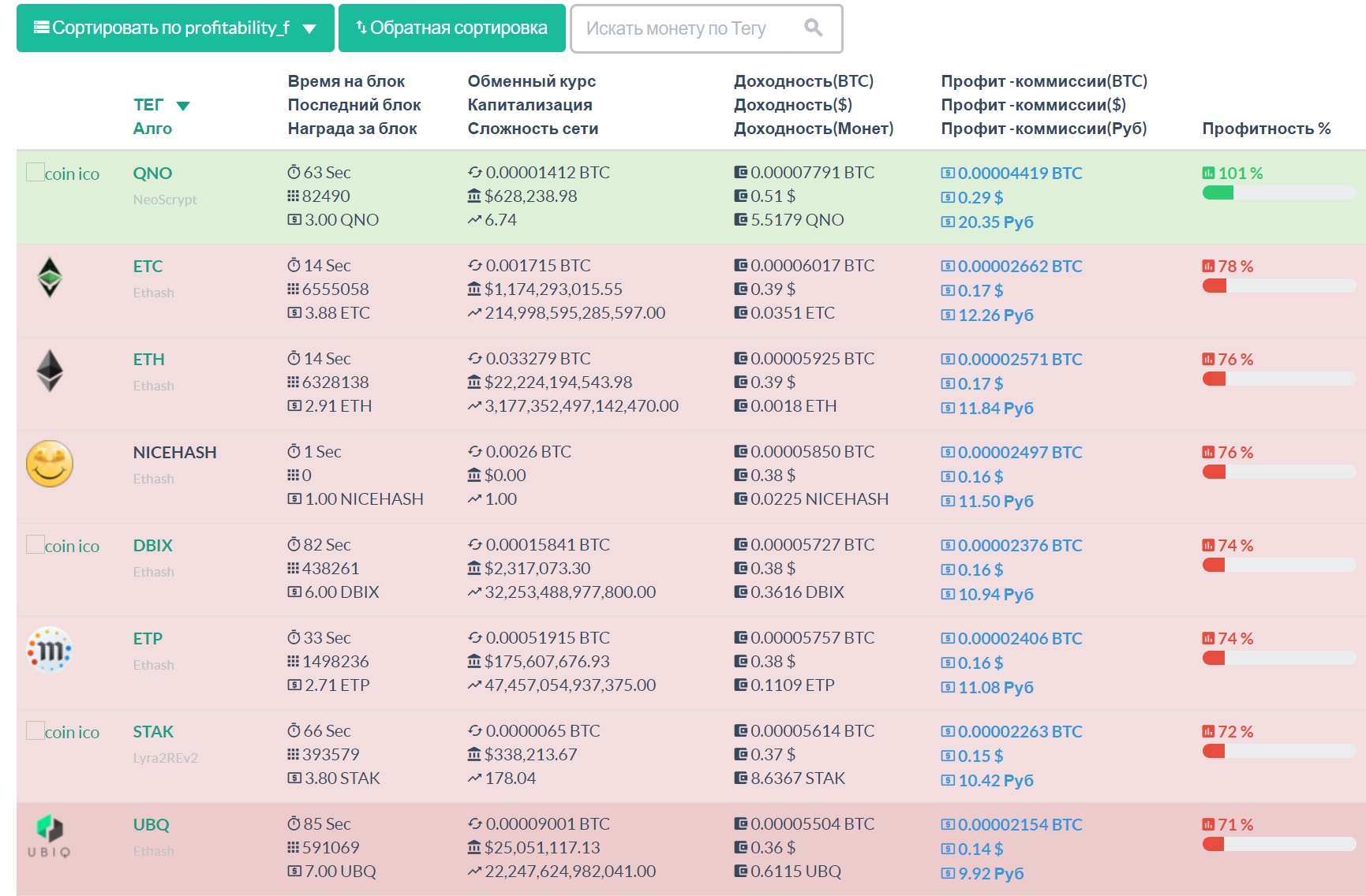 It is worth noting that all such calculators are guided by the characteristics of video cards for personal computers. Because in laptops, if they put full-fledged desktop video cards, they usually reduce the frequencies on which GPUs and memory work because of problems with cooling video cards in cramped notebook cases, so for laptops you can take away 10-20% of the result from calculator sites.

Mining on laptops with integrated graphics

Because Intel does not produce full-fledged video cards, so the developers of the software for mining (miners) do not pay enough attention to the support of Intel video cards in their programs. Therefore, owners of laptops with Intel processors at the moment are not able to run the mining on the integrated in the processor video core. For mobile Intel processors, only the only option is the mining on the CPU, which we will consider below.

The situation with processors from AMD is quite different. Any program that supports mining on video cards from AMD will also work with the integrated video core in AMD processors. Another point is that the performance of integrated graphics is an order of magnitude lower than on full-fledged video cards and expect to have a performance of less than 1-2 MH / s for Ethereum mining on such equipment.

For example, the site calculator Profit-mine.com for a hasht in 2MH / s with Ethereum mining shows a yield of only 4 cents per day. 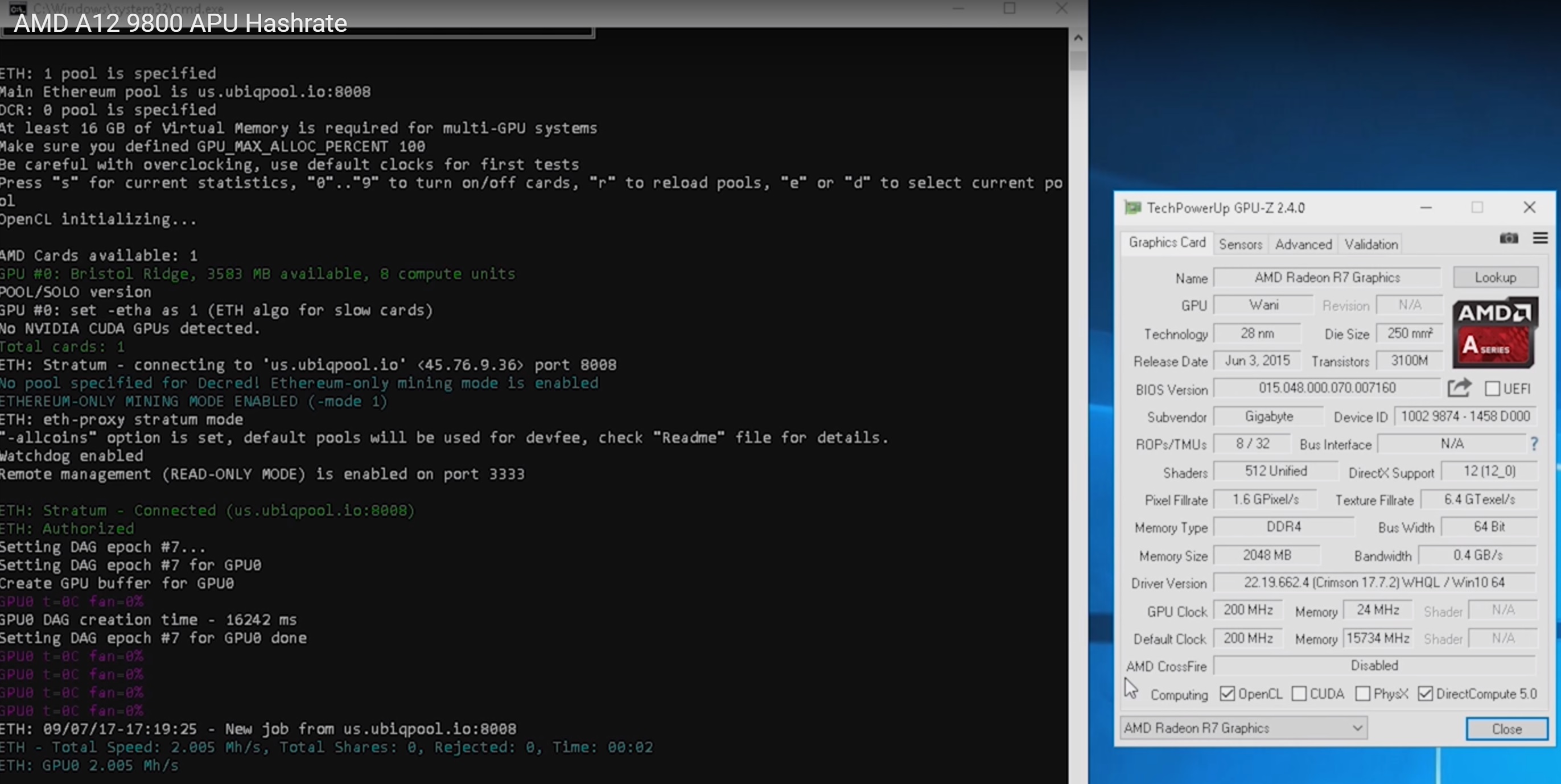 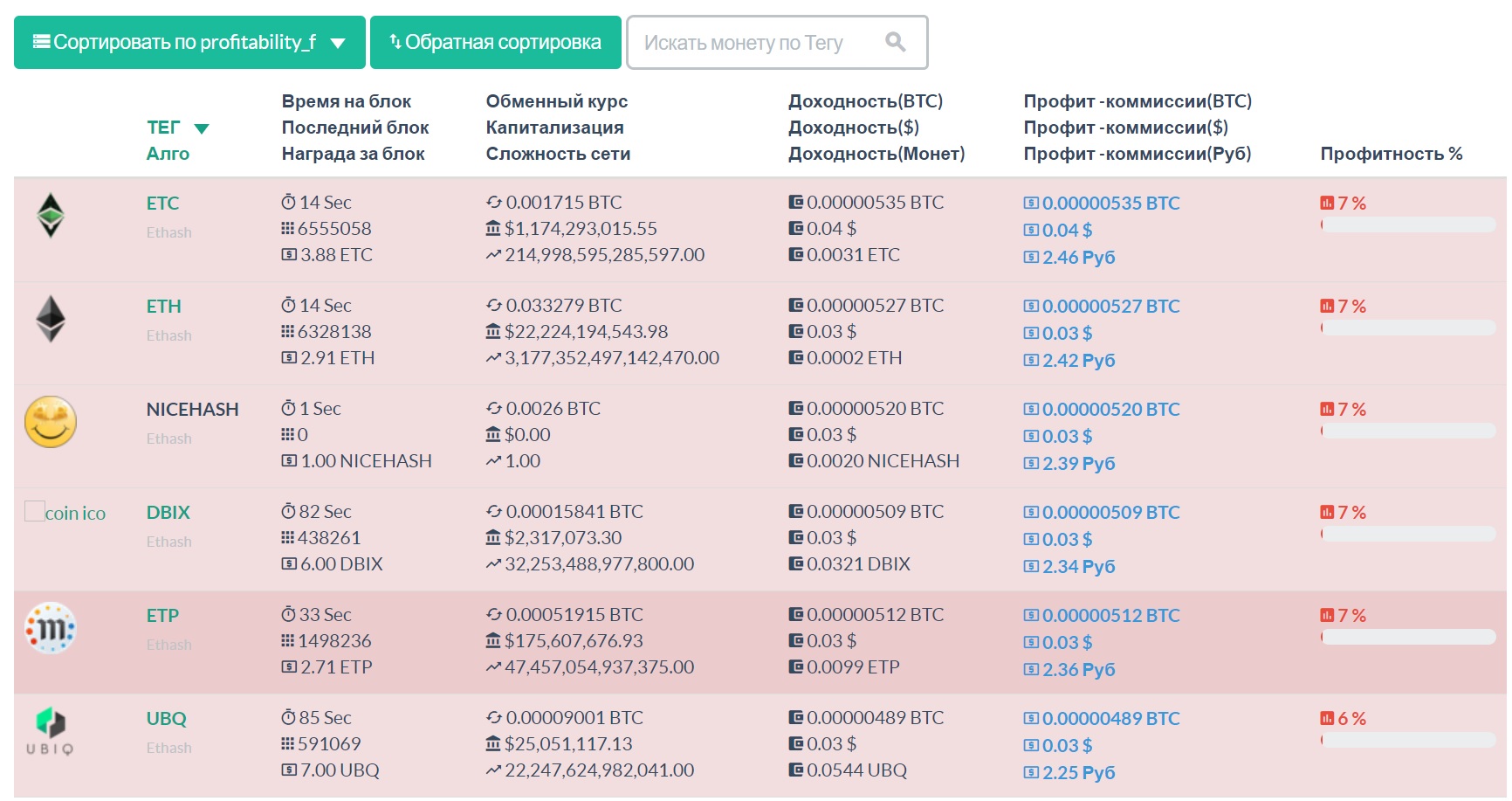 Mining on the central processors of laptops.

Mining crypto-currency on central processors, this was the first available mining that appeared with Bitcoin in 2009. Mining on video cards began to gain momentum only at the end of 2010 with the appearance of open access to the first miners for video cards. Video cards very quickly replaced the CPU from the mining, until they came up with special algorithms with which the graphics cards do not much better than the CPUs. The most popular is the algorithm Cryptonight as the most suitable for mining on central processors because the video cards on this algorithm showed similar results at a higher price and power consumption.

In 2018 Cryptonight algorithm appeared asic, which turned out to be 200 times faster than processors and video cards, but in response to Monero crypto currency, based earlier on this algorithm, switched to a similar algorithm Cryptonightv7 incompatible with Asic.

To date, there are several crypto-currencies available for mining on central processors using the algorithm CryptonightV7 and CryptonightHavy.

This was a little digression into the story of why CPU mining is still alive and well.

Because there are a huge number of CPUs used in laptops, so that it would be almost like to estimate your revenue from mining on mobile processors, go to notebookcheck.net and compare the performance of your laptop with our test laptop on an Intel Core i7 7500U processor. 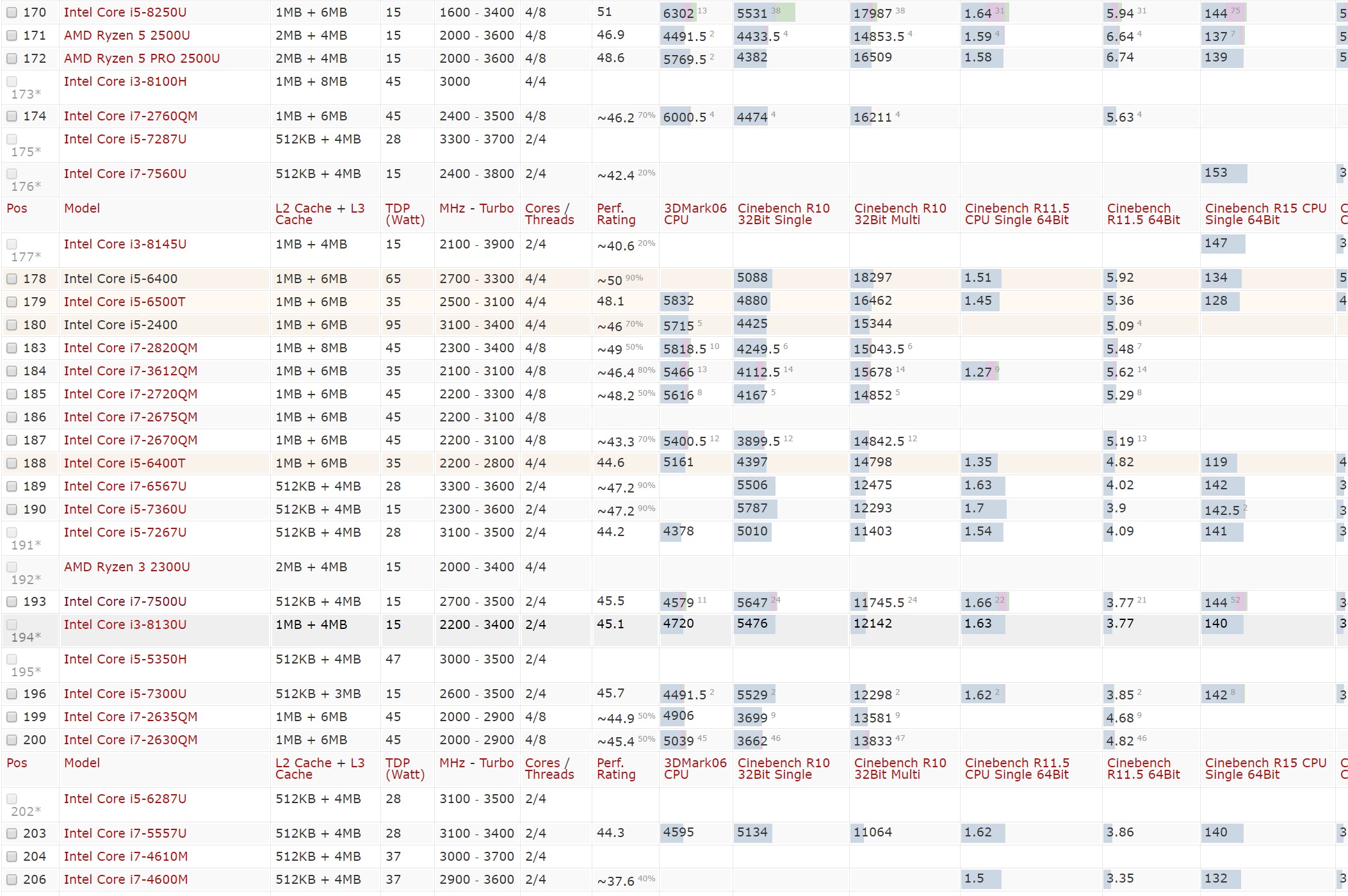 In the presented rating this processor is located at 193 place. If the processor used in your laptop takes higher lines or vice versa, then the result in the mining will be appropriate.

To test our laptop we will use the built-in benchmark NiceHash benchmark. 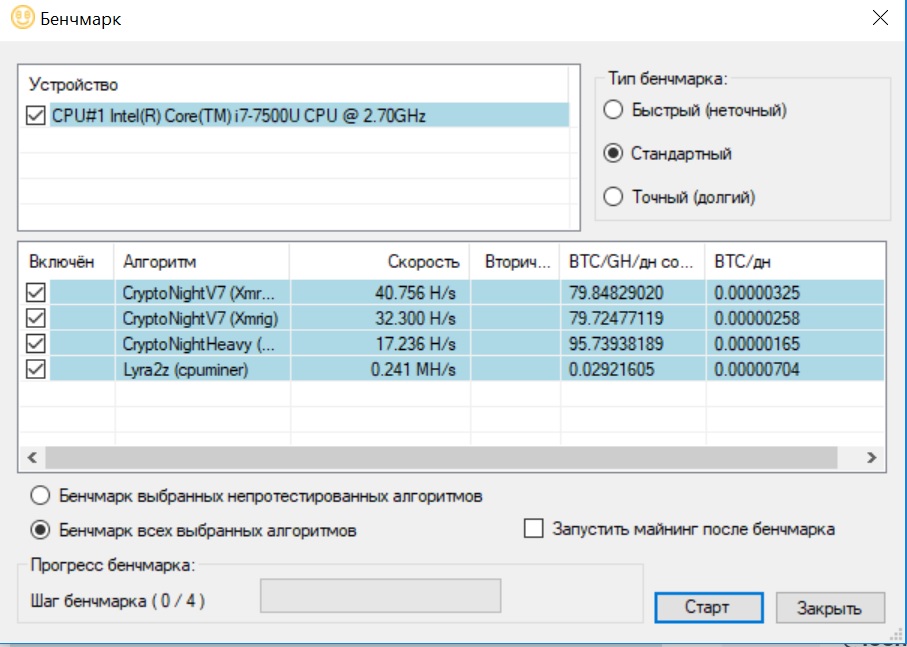 According to the test, our laptop in the process of mining Monero will issue 40 hashes per second. In order to calculate the profitability of mining, we will return to the site calculator profit-mine.com 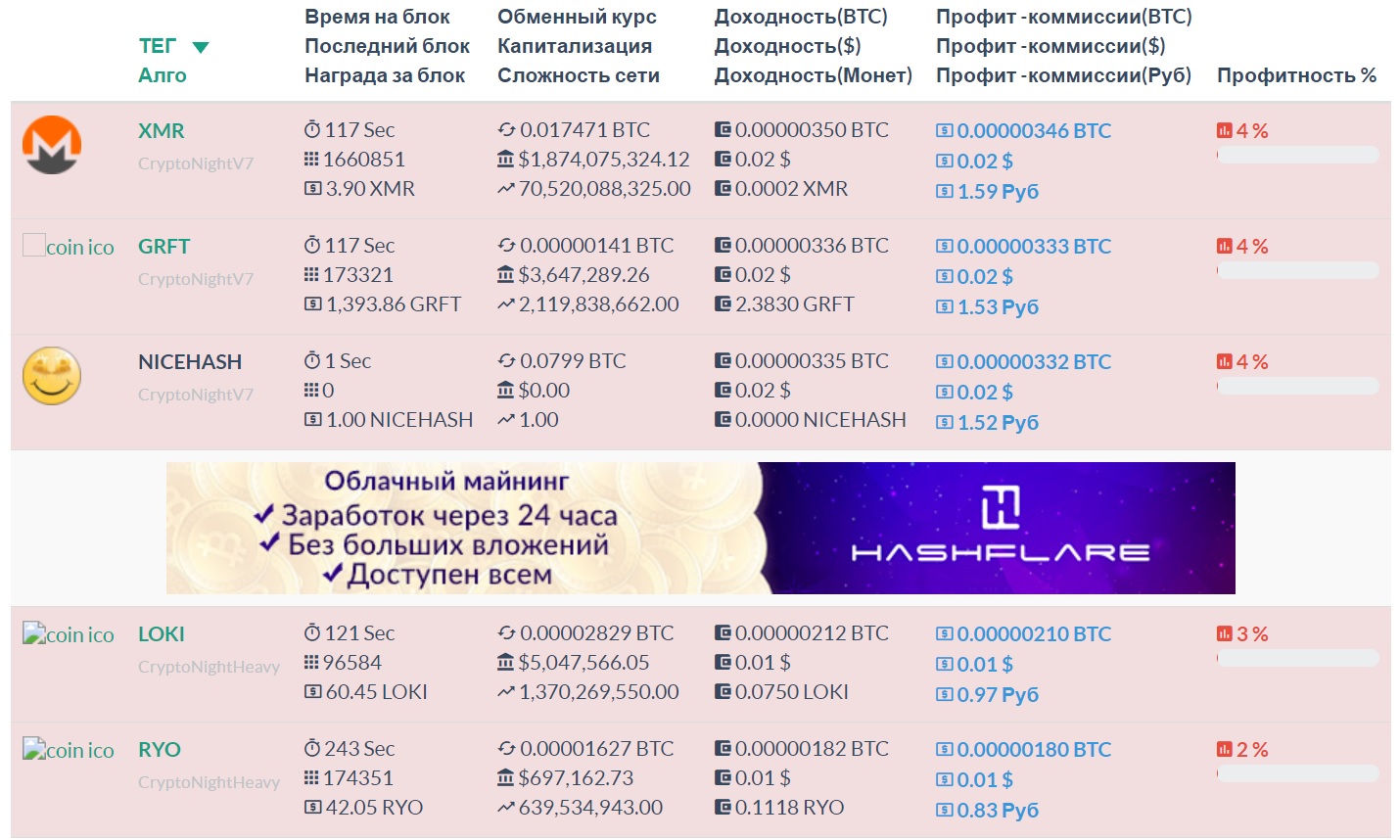 Mining of the Monero crypto currency on the i7 7500U processor will bring you an income of 1.6 rubles per day or 2.3 cents excluding electricity costs.

To check the performance of your laptop, register on Nicehash and download the eponymous miner. During operation of the NiceHash, you need to disable the antivirus or add the miner to the list of trusted programs. the antivirus will count the program for mining for the virus.

In addition to NiceHash, there are many programs facilitating the launch of mining on laptops and computers, for example, Merito, Kryptex and others. You can use such products, but it is worth considering that you will give 20-50% and so not high income to the developers of such applications. Nisehash commission for the use of its universal miner is 5%. If you are not ready to pay developer NiceHash 5% of your income, then you have to deal with a lot of different miners for each mining algorithm, and the developers of these miners also take commissions from your income in the range of 0.5-2%.

The easiest way to get rid of NiceHash is to decide on the crypto currency you will be mining, to find a mining pool for it, which usually specifies the best miners for the particular crypto currency and the necessary settings to start mining on the selected pool. For laptops, we recommend using the well-known MinerGate pool with Monero crypto currency support, in which there is a convenient application for Windows mining, which will be appreciated by beginners.

On laptops, the following types of mining are available:

Conclusion: Mining crypto currency on laptops practically does not differ from mining on full-fledged GPU rigs with several video cards, and a laptop with a built-in video card can in fact be considered a full-fledged GPU mining rig, where the setup and launch of mining is completely identical with the GPU rigs.
Another point is that because of the low productivity of all components in laptops, the profitability of mining will only satisfy enthusiasts or novice miners in order to obtain the necessary skills in working with full-scale mining rigs. An additional negative point, which does not speak in favor of mining on laptops, is the increased heating of all components, which many laptops simply can not cope with over a long period of time. In addition to the increased wear and tear of electronic components during the mining on the laptop, the battery battery life is badly affected. The service life of which in the operating mode 24/7 can be drastically reduced to six months.

In other words, if you are interested in mining a crypto currency, but you do not have a personal computer, then before purchasing graphics cards, motherboards to create your own farm GPU, the laptop will be an excellent option for gaining the skills of working with miners, pools, crypto-exchange exchanges and exchangers.

P.S. Mining Bitcoin on laptops is possible, but it is not entirely feasible due to the fact that now bitcoin is mined in Asiс, which are thousands of times faster than conventional processors and video cards. Instead of mining bitcoin, it's better to get another crypto currency, for example, Monero, and to change it already with the help of crypto-exchange on Bitcoin.