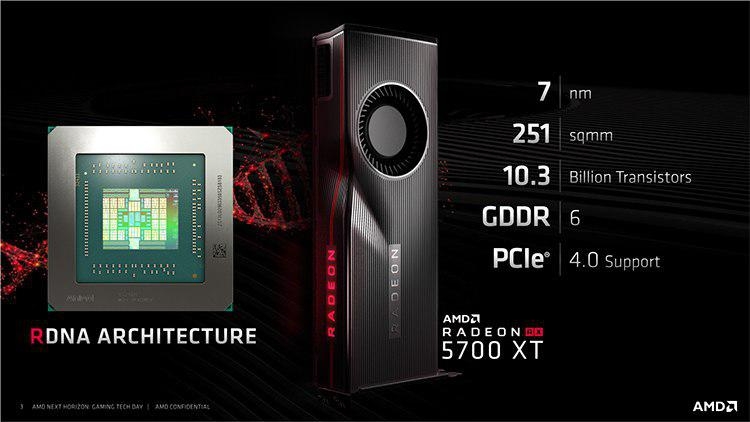 Today at E3 in Los Angeles on June 11, 2019, AMD held a full-fledged presentation of its new generation NAVI video card called the Radeon RX5700XT and RX5700. Compared with the first announcement at the end of May at Computex 2019, AMD has provided full technical specifications of its new video cards. Therefore, it will be interesting to compare the new products with competing products from the Nvidia company and AMD video cards of the previous generation and try to make a forecast of the performance of the Radeon RX5700XT and RX5700 in cryptocurrency mining

As is known from the presentation, AMD video cards will compete with Nvidia’s RTX2070 and RTX2060, while offering a bit more gaming power at a lower price. So for the RX5700XT promise an advantage of 5% over the RTX2070, and for the RX5700 - 11% over the RTX2060. But since games and mining load GPU blocks of video cards in different ways, it is therefore not necessary that the NAVI video card will have the same advantage in mining. Moreover, traditionally different GPU architectures have advantages in mining depending on the chosen algorithm.

To make the mining performance forecast more accurate, first of all, compare the technical characteristics of similar products:.

Of particular interest is the comparison of the AMD RX 580 video card on the 14 nm process technology and the RX 5700 on the 7nm process. With a similar power consumption of 180W, GPU performance increased by 29% from 6175 Gflops to 7950 Gflops, but at the same time the frequency of the GPU in the new product is also 29% higher (1725 instead of 1340 in RX580). From here, we would like to ask the question, where are the promised 15% performance gains from the new RDNA architecture? The number of blocks remained unchanged at 2304.

It turns out AMD engineers in the development of RDNA architecture in the first place looked towards improving performance in games without paying attention to the overall performance in GFLOPS, which is just the direct effect on the hashrate in mining. It is possible that new products with a new architecture will be able to compete on mining algorithms sharpened by Nvidia due to a larger cache, but this all requires verification after the appearance of the RX5700 on sale. 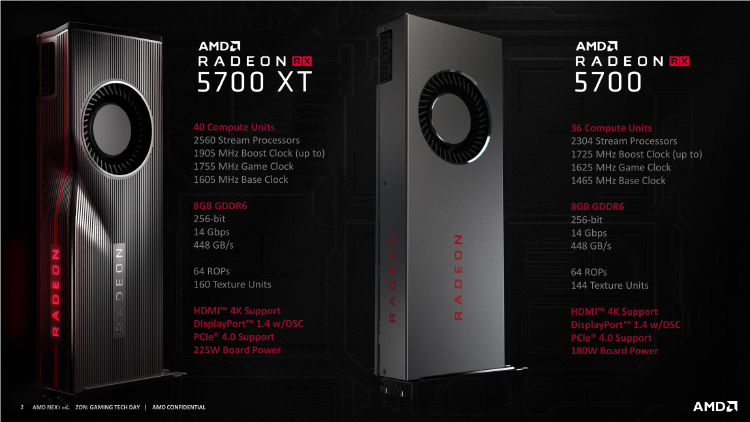 If we have a lot of questions left to the GPU Navi itself, then the memory subsystem with the new GDDR6 memory is fine, because with the same memory bus width of 256bit, the data channel bandwidth increased by a significant 75%. What will primarily affect the memory of dependent mining algorithms, such as Ethash. If the RX580 based on the Ethash algorithm with a power consumption of 120W (on average) showed a hashrate of 25 to 33MH/s, then from the RX5700 you can expect from 43 to 57 MH/s with the same power consumption, which sounds pretty optimistic.

For the another model RX5700XT, the memory subsystem is the same as the RX5700, so you should not expect any significant superiority on the Ethash algorithm. Most likely, like the previous generation of video cards, this increase will not be more than 1-2MH/s.

If on the Ethash algorithm, future performance can be more or less accurately represented, then with processor-dependent algorithms, such as Cryptonight, everything is much more complicated. Because in the RX5700, we have a new architecture that does not know how to behave in mining cryptocurrency. If you rely only on pure performance in GFLOPS, the older model on the CryptonightV8 algorithm will be at the level of Vega56 or slightly weaker, but with similar energy efficiency. Those. when compared with the Vega 56, we get the same performance, but for much more money, which is bound to upset. But again, it is worth waiting for the real tests and hope that the new architecture from AMD is not a paper announcement. And the actual performance in the mining of processor-dependent algorithms will be 25-40% higher, as stated for gaming applications.

We present all our arguments in a more visual form:

If you do not look at the announced prices of 450USD and 380USD for the RX5700XT and RX5700, then the performance gain in mining for mid-budget cards is quite noticeable, but can they be called so when the prices have doubled since 229 to 450USD. And if you consider that now new AMD Radeon RX580 video cards can be bought for 150USD, then the choice in favor of Navi video cards becomes obvious only for those who have expensive electricity. For everyone else, the choice between the RX580 and RX5700 will not be so easy.