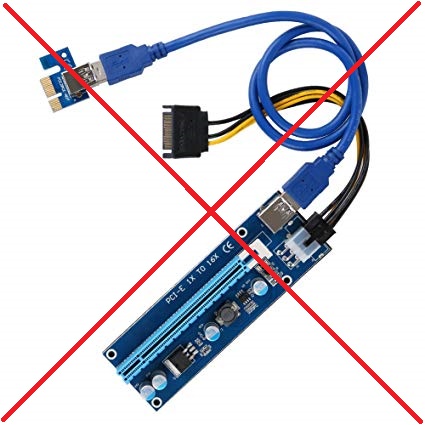 On July 7, 2019, AMD released several new products at once: Radeon RX5700 graphics cards, Ryzen 3000 series processors and X570 motherboards. After just a few days, an interesting feature emerged in the operation of computers assembled entirely from new components, namely, on such configurations, the RX5700 and RX5700XT video cards do not go into 3D mode when using PCI-express risers. Those. video cards always operate at lower frequencies intended for operation in 2D mode.

Such risers are used primarily by cryptocurrency miners to connect a large number of video cards to a single motherboard, but often they also use risers to more effectively place video cards in computer cases. And it was for such purposes that a computer was assembled for the Hardware Canucks site, which revealed such an unpleasant feature in the operation of AMD Radeon RX5700 graphics cards connected to the motherboard via Riser PCI-express

Unfortunately, we do not know what type of riser was used in the assembly: a full-fledged 16-line transmission or USB riser with one line, but most likely the problem is not this, but in the raw BIOS and drivers in new AMD products. Also one of the versions of noteworthy is the riser wires, which must meet the new requirements for PCI-Expreess 4, i.e. support data transmission at a frequency of 250MHz, instead of 100Mhz for PCI-express 3.

In any case, this is an interesting fact that will be interesting not only to gamers, but also to miners who decided to assemble mining rig on new AMD X570 motherboards with Ryzen 3000 series processors and NAVI video cards from AMD as well.

It is worth noting that with motherboards based on previous solutions X370 and X470 similar problems have been identified.

More information about the discussion of this problem can be read on Reddit.