The energy efficiency of asic miners has grown 223 times since 2013. Comparison with video cards.

The history of the appearance of asic miners for bitcoin mining began in 2012, when the Butterfly labs company was the first to announce such devices with a hashrate from 5 to 60 GH/s. But due to development and production problems, the company eventually lost Canaan's leadership and closed after litigation due to a delay in the first supply of mining equipment. Canaan, in turn, bought Avalon in 2014, which first released Bitcoin Asic Miner in early 2013 under the name Avalon1 - the SHA-256 Asic Miner existed in 3 versions, the average model had a performance of 70GH/s and an energy consumption of 600W.

Avalon 1 at 70Gh/s consisted of 240 Asic A3256 chips manufactured at the TSMC factory according to 110nm standards, which in 2013 was already considered an outdated technological process, as The process was already running 28nm. The first ASIC miner released for the SHA-256 (Bitcoin) algorithm had an energy efficiency of 6.6 J/GH or 6600 J/TH. But even with such modest performance by today's standards, the first ASIC miners were 43 times more energy efficient than the most modern video cards manufactured at that time using 28nm process technology (Radeon HD 7970).

The first Asic miners were a huge success, because brought their owners superprofits of thousands of percent. Therefore, by the end of 2013 and the beginning of 2014, a new generation of ASIC miners from Avalon, Bitmain, ASICMiners, BitFury had already released 55nm process technology, which were on average 10 times more energy-efficient than the first models from Avalon and Butterfly Labs. Because of what, Asics of the previous generation instantly lost their relevance. For comparison, in 2020, the new generation of Asic Bitmain Antminer S19 Pro (29.5 J/TH) is 45% better than previous Antminer S17 Pro (53 J/TH) models.

If we compare the first ASIC miner models for Bitcoin with an energy efficiency indicator of 6600 J / TH with the latest Bitmain Antminer S19 Pro 29.5 J/TH models, then the performance of ASIC miners per watt on the SHA-256 algorithm has grown 223 times since 2013.

You can get acquainted with various models of Asic chips for mining Bitcoin on this page. 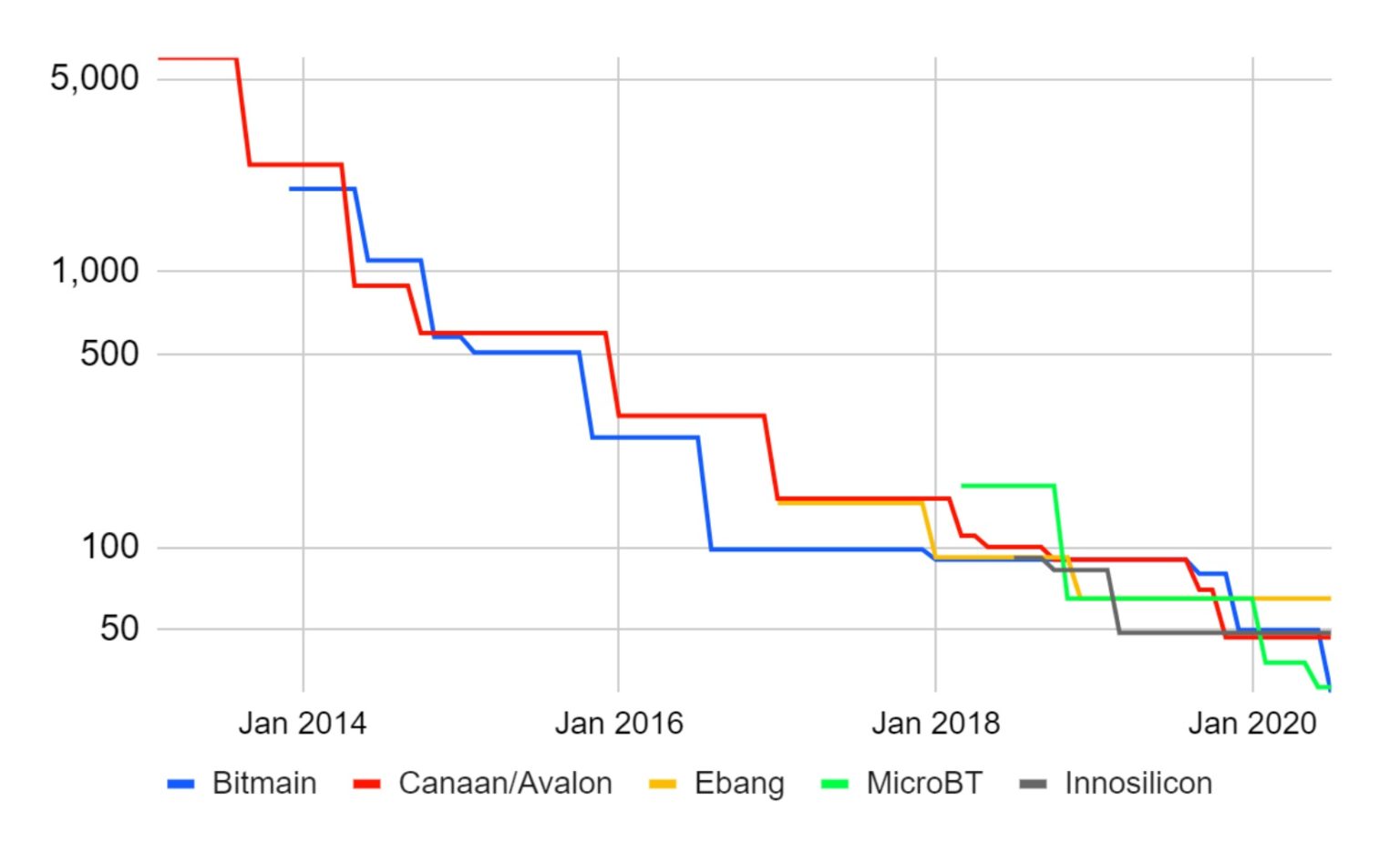 Now let's compare how the performance and energy efficiency of video cards in Bitcoin mining changed from 2013 to 2020.

The performance of old video cards in Bitcoin mining can be found here.

Conclusion: The development of Asic miners compared to video cards is much faster, which is why Asic miners become obsolete much faster, which must be taken into account when buying this type of equipment. With each new generation of ASIC miners, their progress in speed and energy efficiency is constantly slowing down from several times a year to tens of percent, which is already comparable to video cards. This increases the depreciation time of asic miners due to their longer obsolescence. It is possible that in a few years it will be possible to put an equal sign between asics and video cards by the time they are used in cryptocurrency mining.