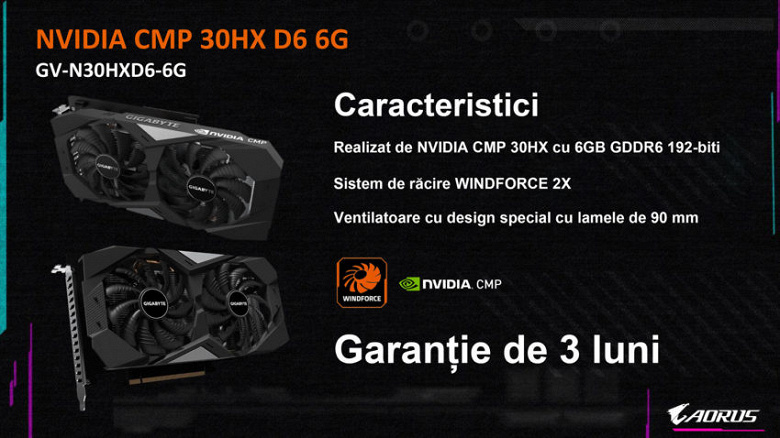 Sales of Gigabyte CMP 30HX D6 6G began in Romania at a price of 2.975 Lei or 720 USD. This model has a limited warranty of 3 months and does not have video outputs, which is not critical for mining, but completely excludes the use of such models of video cards for ordinary computers.

For comparison, the Nvidia Geforce GTX 1660 Super video card, similar in performance in mining, is now sold even cheaper, although it has a recommended price of 230 USD. But at the same time, you have a full set of video outputs and a 1-3 year warranty (depending on the model and manufacturer).

Therefore, the new line of Nvidia CMP video cards released to reduce the demand from miners for conventional video cards, according to Nvidia, most likely pursues completely different goals, namely the official increase in the selling price for video cards by Nvidia itself. And instead of gaming models of video cards, their cheaper counterparts went into production, but at a price doubled. At the same time, the shortage of gaming video cards will most likely only increase, since production capacities are limited, and it doesn't seem logical to release a GTX 1660 Super video card instead of the CMP 30HX, which is half the price. I think you yourself have guessed which models of video cards will be given priority to the manufacturer's conveyor capacities while there is an increased demand from cryptocurrency miners for video cards.