Perhaps you remember that back in June, Sia announced their plans to develop a specialized ASIC miner for SiaCoin mining called Obelisc SC1, capable of delivering a hash of about 300+ GH / sec on this algorithm with an energy consumption of less than 500 watts. Considering that in Decred a very similar mining algorithm is used, as in the mining of SC (SiaCoin), both these algorithms are variations of the Blake algorithm, the company also decided to develop and ASIC a miner for the mining of Decred. Obelisc DCR1 will show performance at 475 GH / sec at 500 watts of power consumption. Both these ASIC miners will be on sale at the same time.

At the moment, the preliminary sale of the first batch of 4000 Obelisc DCR1 devices, as well as the sale of Obelisc SC1, has been announced. Both pre-sales will be launched no later than November 24, with a preliminary date of dispatch until June 30, 2018. Both the Obelisc DCR1 and Obelisc SC1 both will be available for $ 2,499 and will have a 6-week exclusive production period and a coupon of $ 250 (for unit) for further purchases of company products as bonuses.

Since this is only a pre-sale of the goods, which is still under development, we advise you to be extremely cautious, since in this case no one is immune from fraud and empty promises. We do not have anything against Obelisc and they have a cohesive team that is currently developing, we just encourage you to be more careful, since this is only a preliminary order of a product that has not yet been developed to the end and the final device (if it eventually appears in the end ) may have characteristics that differ from those declared by the developers. 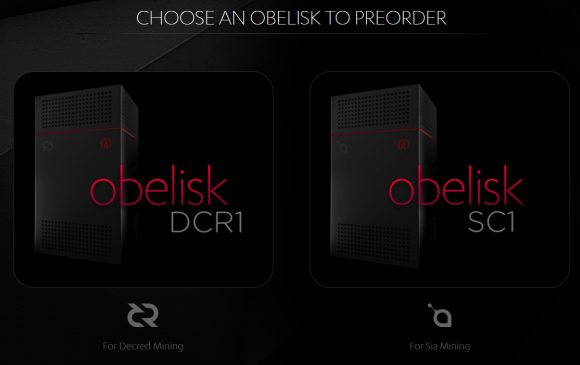 If in the second half of next year Sia manages to fulfill its promises concerning Obelisc ASIC miners for SiaCoin and Decred, they can significantly change the market for these crypto-currencies. It is not yet clear how this can affect the use of file hosting services based on SiaCoin tokens, since SC is more than just an altcoy, while Decred is rather a traditional crypto currency.